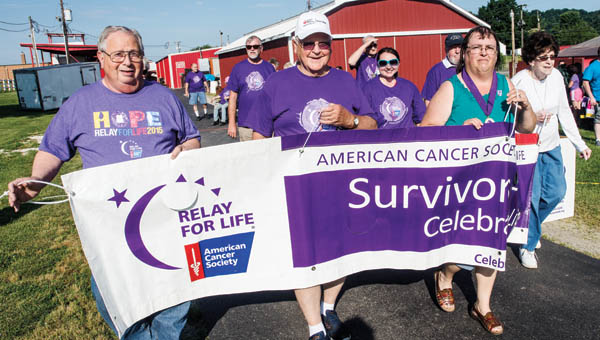 Participants in Friday evening’s Relay for Life walk the survivors’ lap at the start of the event at the Lawrence County Fairgrounds.

The fundraiser, at the Lawrence County Fairgrounds, raises funds for the American Cancer Association and offers support to those fighting the disease.

The relay kicked off with a survivor lap, in which a group of about 20 people who have battled cancer walked around the track to cheers from the crowd. They were followed by a lap walked by the caregivers, before the teams began walking the track for the main event.

Melanie Kerstetter, one of the organizers, said the teams had been doing fundraising well in advance of the relay. Her team, Grey Matters, was taking part in honor of her son, Dustin Clark, is currently fighting a brain tumor.

“We’re doing it to raise awareness of brain cancer,” she said.

Another group, Team Jack, was taking part in memory of Jack Rudman, a Coal Grove native.

“My husband had cancer and passed away two years ago in July,” Becky Rudman, of South Point, said. “He was 43 years old.”

The team was comprised of Jack’s friends and family members and chaired by his stepdaughter, Kara Rudman.

Throughout the event, the teams had to have a continuous presence on the track walking, rotating out members.

Some teams represented local businesses, such as South Point Wal-Mart, or schools like Ohio University Southern.

One team came from across the river, from Huntington East Middle School. James Wagner, with the group, said they had previously taken part in the Cabell County Relay for Life.

“It’s a student group and they meet throughout the school year,” he said.

In addition to walking the track, the group had a tent set up where they sold food and other items.

Other tents were set up for vendors such as Avon and It Works!, a health wellness company, that had donated to the rally in exchange for a vending space.

The first performer, who played during the caregivers walk, was James Horan, 18, of Kenova, who covered songs by Merle Haggard, Johnny Cash, Willie Nelson and John Mellencamp.

Kerstetter said the event also hosted a dinner for the survivors, which was organized by Lisa Bundy, the relay’s survivor chair and sponsored by Thermal Solutions of Proctorville.

At dusk, a tribute was paid to those who had lost their lives . A luminary walk took place around the track, with lighted bags, each in memory of a friend or family member, set up around the lap in memory.

To keep things interesting, throughout the night, some of the laps were dedicated to themes, such as Power Purple, or the Decade Lap, in which those on the track dressed in attire from appropriate to a time period.

The night was set to wrap up with a victory lap, held at midnight.