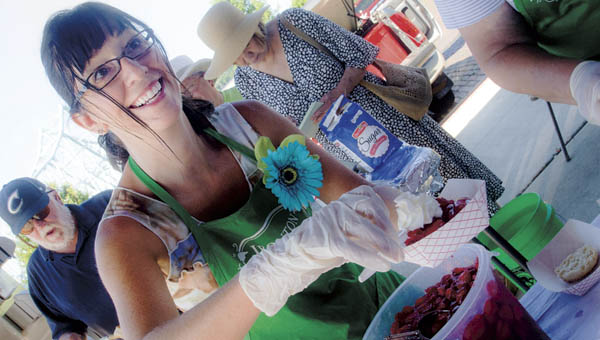 Rynee Jividen, with Ironton In Bloom, serves up strawberry shortcake during the Strawberry Festival in downtown Ironton on Saturday.

Strawberries morning dessert of choice for those at market

Saturday’s strawberry festival kicked off the season of food fests by Ironton In Bloom.

The second Saturday in each month is designated to present a free fresh produce snack at the Ironton Farmers Market.

“It started slowly,” Steve Call, of IIB said about the morning. “But the enthusiasm started growing.”

Call was busy buttering and sugaring dozens of biscuits that would soon be drenched in juicy strawberries and whipped cream.

“This presents the best of the season,” he said. “And it’s by donation only. All money is used to pay for flowers Ironton In Bloom has contributed.”

Next Friday and Saturday some vendors anticipate produce harvested from their own gardens.

“A lot of the tomatoes are starting to come in,” Knipp said. “Hopefully.”

Knipp cited the extra amount of rain followed by frost and then rain for the delay.

Judy Balmer expects her popular Cherokee heirloom tomatoes by the first of July.

Next month will be corn fest followed by watermelon fest in August, tomatoes and fried bologna in September and apples in October.