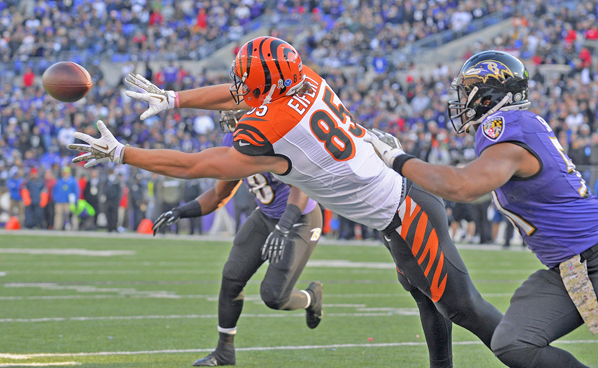 Cincinnati Bengals’ tight end Tyler Eifert (85) reaches to make a diving catch against the Baltimore Ravens. Eifert was injured last year and will not be available for the team’s minicamp. (MCT Direct Photos)

CINCINNATI (AP) — C.J. Uzomah made a move toward the sideline, but the ball was there already and he couldn’t get to it. A position coach yelled at him to get out of his cut quicker.

The Bengals have a lot of work to do with their tight ends.

Cincinnati will be missing one of its top pass catchers for much of training camp and perhaps longer. Tight end Tyler Eifert recently had surgery on his left ankle, which was injured during the Pro Bowl and didn’t heal as expected. The Bengals are hoping he’s ready for the season opener on Sept. 11 on the road against the Jets.

Eifert’s injury is a huge setback to an offense that revolved around him and receiver A.J. Green last season. Eifert had one of the best seasons in Bengals history, catching 52 passes for 615 yards and 13 touchdowns, a club record for a tight end.

“For a guy to be as big as he is, to run the routes the way he does, to go up and make plays — he’s a special talent,” Andy Dalton said on Tuesday before the first practice of minicamp.

“It’s been good for those other tight ends to get in there for camp and get the experience of being out there and seeing how different coverages play out.”

They need to be quick studies.

The offense is the main area of intrigue as the Bengals try to break their 25-year drought of playoff success. A defense that gave up the second-fewest points in the NFL last season returns basically intact, although linebacker Vontaze Burfict will miss the first three games under a league suspension for his illegal hits.

The offense is a different story. Receivers Marvin Jones and Mohammad Sanu left as free agents, replaced by free agent Brandon LaFell and rookie Tyler Boyd. The Bengals were hoping that Eifert and receiver Green would provide continuity, but now their top tight end is gone indefinitely.

His backups haven’t done much, either. Uzomah and Tyler Kroft were rookies last season. Kroft had 11 catches for 129 yards and a touchdown. Uzomah caught one pass for 4 yards. Jake Kumerow spent last season on the practice squad.

“We’ll get to evaluate them when we get to play in the four preseason games,” coach Marvin Lewis said. “When we get an opportunity to play live football, we’ll get a chance to judge them.”

The Bengals will be looking for a lot more out of Kroft, a third-round pick out of Rutgers known for his ability to get open.

“The more you play, the better you’re going to feel,” Dalton said. “For Tyler and for me, it’s understanding how he runs things, how I expect him to be in certain spots. All of that will carry over to game-time situations, and that’s when you know you have to perform.”

The Bengals have lost first-round playoff games each of the past five seasons, an NFL record. They haven’t won a playoff game since the 1990 season, the sixth-longest stretch of postseason futility in NFL history. Last season, they blew a lead in the closing minutes of an 18-16 defeat to Pittsburgh at Paul Brown Stadium.

Notes: Linebacker Rey Maualuga was among those who didn’t participate in practice. He watched from the side. … Burfict, who has cut off his dreadlocks, is allowed to practice through training camp, but can’t be with the team during his three-week suspension. He’s being penalized for his numerous illegal hits, including one to the head of Steelers receiver Antonio Brown that set up Pittsburgh’s winning field goal in the playoff game. The Bengals play at Pittsburgh on the final weekend of his suspension.

ATLANTA (AP) — Brandon Finnegan said it was “pretty obvious” his six innings against Atlanta were a struggle. To survive... read more