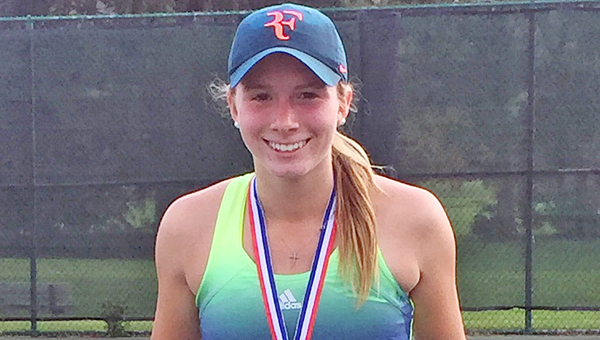 SOUTH POINT — Madison Riley is still heading to college this fall and will play tennis, she’ll just have to drive a little further.

Instead of playing for Morehead State, the former South Point Lady Pointers’ standout will be lacing up her sneakers for the Western Carolina Catamounts.

“It was really short noticed. I found out that it’s been in the works for a while,” said Riley.

But the coaches at Western Carolina both played at Marshall University and contacted Riley’s tennis coaches to verify their scouting reports on her.

“The coach used to play for Marshall and the (WCU) assistant coach was assistant at Marshall. They know my current coach I practice with and they called after they heard I was available,” said Riley.

“We are so excited to have Madison joining us this fall,” said Kissell-Eddins. “She has an aggressive all-court game style and is a great competitor on the court.

“I know she will make a big impact for us next season and we are excited to help her reach her goals when she arrives to Cullowhee.”

“They did really well this past season with school record with most program wins. The current coaches have only been there a couple of years so they’ve done a lot in a short period time.”

Riley is ranked as the No. 5 recruit out of Ohio according to TennisRecruting.net and is listed as a three-star prospect.

She is a three-time state qualifier in Division II and was named to the 2015 OHSAA all-state team. She has been ranked inside the top 220 players in the nation in her recruiting class throughout her career.

“Actually, it’s better. They’ll let me substituted some classes that are all ready full and it’ll help lighten the load a lot,” said Riley.

One drawback to play in North Carolina as opposed to Morehead, Ky., means a greater distance for her parents Kim and Eric Riley to travel for matches.

“Our conference matches are in North Carolina, Samford (Alabama) and Southern Alabama. We won’t get to play as much at home but our first match is at Eastern Kentucky so my parents get to go,” said Riley.