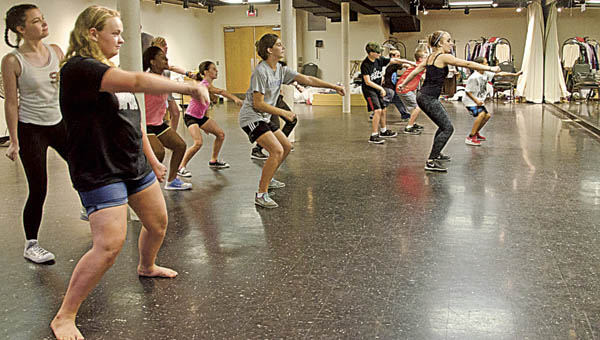 Students take part in a hip hop dance class as part of the summer camp in the arts at the Paramount Arts Center in Ashland on Tuesday.

ASHLAND, Ky. — Children and teens are learning about all forms of art at the annual summer camp at the Paramount Arts Center in Ashland.

The three-week long camp opened on Monday, and offers students a chance to take part in dance, theatre, music, film, stage make-up, drawing,mixed media and cooking, among many topics.

“Pretty much anything that’s considered art,” we offer a course in it,” Melanie Cornelison, the Paramount’s education director said.

She said the center has offered summer camps since the 1970, but six years ago, they expanded their offerings to the current, extensive offerings for those from ages preschool to 18.

Cornelison said a highlight of the last two weeks’ activity is a production camp, which takes the students through every step, from auditions to performance, learning songs and dances for a performance of “Willy Wonka.”

A theater class was one of those meeting on Tuesday on the theater’s main stage.

Instructor Joanna Murdoch said the course “ABCs of Acting” gave the students, aged 5-7, a chance to write and act out their own story.

“We take elements of different fairy tales and combine them,” she said. “So we have a lot of Batmans and Elsa.”

Murdoch led the children through improv exercises, in which they acted as characters such as the fish from Dr. Seuss’ “Cat in the Hat,” The Incredible Hulk, Kylo Ren from “Star Wars” and others.

He said this particular group, which ranged in age from 9-17, were the Beat Breakers. Earlier in the day, “Baby Boppers” was offered for younger students.

“We learn multiple styles, from pop locking to breakdancing.

Some of the children had adopted hip-hop nicknames for the class.

Terry’s son, Shawn Terry Jr., of South Point, was going by the name “2.0,” his friend Jaden Mason, of Huntington, was calling himself “Terminator,” based on his Arnold Schwarzenegger sunglasses. Jacob Hickman, of Boyd County, used the moniker “Slingblade” and Caleb Rose, of Ashland, was nicknamed “Febreeze.”

Terry said he has worked as an instructor at the center for four years, teaching summer camps, as well as spring and fall semester classes.

Cornelison said it is not too late for students to sign up for the classes, especially the final two week offerings. She said anyone interested can call the Paramount at 606-324-3175 or visit the website at www.paramountartscenter.com, where a listing of the courses is posted.

In addition to the camp, she said the Paramount Players will be doing a performance of Disney’s “High School Musical” from July 25-30.

This year marks the 10th anniversary of the release of the popular film.

“A lot of the teens who are in it now were in elementary school when it first came out and they’re very excited to do it,” she said.

AG-Biomass case to be heard in September Dates have been set in the case of Ohio Attorney General Mike DeWine... read more