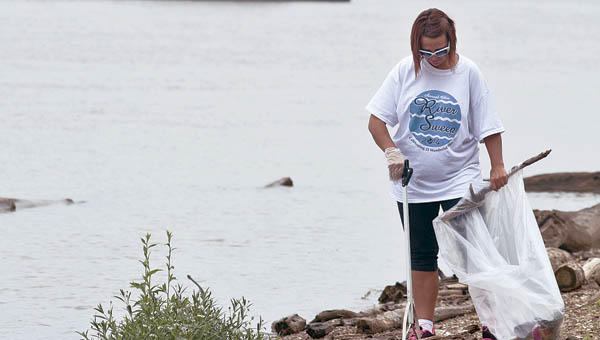 The Ohio River Sweep, sponsored by the Lawrence-Scioto Solid Waste District, is set for Saturday.

A fifth site has been added to this Saturday’s Ohio River Sweep, sponsored by the Lawrence-Scioto Solid Waste District.

“A group has taken on the Proctorville Lock 57, headed by Richard Booth,” Stephanie Helms, river sweep organizer, said. “He and some friends and family are going to do it. They fish at that location.”

Anyone wishing to join that site or the other four can just show up on Saturday at 9 a.m. Bags, gloves and T-shirts will be provided at each location.

Other locations are at Symmes Creek near the Huntington bridge; South Point boat ramp, where Helms will be in charge; Coal Grove boat ramp, adopted by Ironton Teen Club headed by Stacy Patterson; and Center Street landing, where Dan Palmer, district director, will be in charge.

“Each site has a site leader,” Helms said. “They will have all the supplies.”

Donations this year are from Coca-Cola; 7 Up in South Point giving bottled water and South Point Food Fair with donuts. Wal-Mart donated a gift card used to buy miscellaneous supplies such as Band-Aids, hand sanitizer and first aid kits.

Helms warns volunteers to watch out for broken glass and poison ivy and to wear closed-toed shoes.

Thousands of volunteers will line the Ohio River banks from Pittsburgh, Pennsylvania, to Cairo, Illinois, from 9 a.m. until noon.

The Goblin Traders on Center Street in downtown Ironton.   On the first of November 2014, Bryce Martin, 22, of... read more