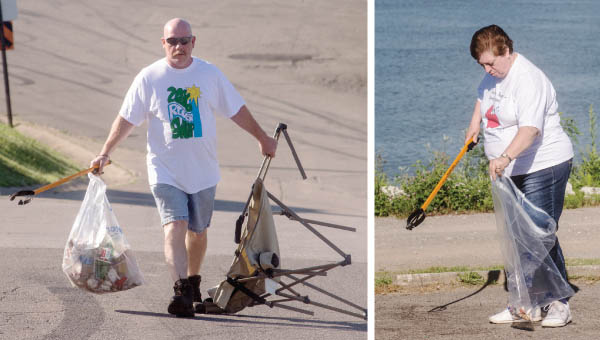 Back when Mary Rose started working at the Ohio River Sweep in the 1990s, volunteers would often bring back the big stuff.

“There were way more tires then,” Rose said as she took a break during Saturday’s sweep at the Center Street boat landing. “Tires, refrigerators. Things would be piled on the bank. We would have close to 100 bags.”

A flower garden planted around the flag pole by the floodwall would be stacked up with beer bottles.

Then teens from churches, Boy Scout Troops 106 and 103 and a juvenile home for young girls would line the river bank.

“When they left, it was clean,” she said.

This Saturday a crew came from the juvenile home who didn’t have as hard a time as it was 20 years ago. Only about 20 bags of trash were pulled from the river bank and boat landing.

The only big item was a broken down folding chair.

Palmer attributes the relative cleanliness to the consistence maintenance by community service crews.

COAL GROVE — Police officers, friends, family and the community came out on Saturday to mark a milestone for the... read more