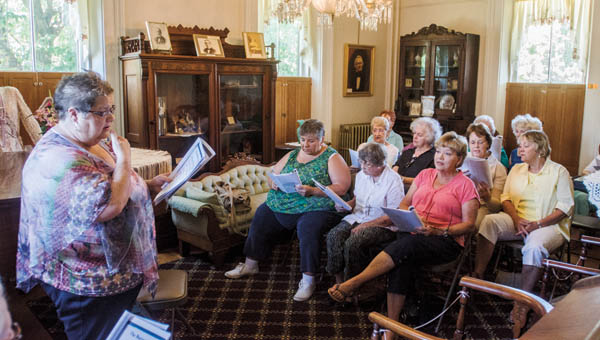 Terri Sandborn leads guests in a historical sing a long Saturday at the Lawrence County Museum.

From the Marine Corps hymn to “Tell Me Why the Stars Do Shine” in a packed drawing room at the Gray Mansion, singers joined in chorus after chorus for the inaugural Fred Waring sing-a-long.

The sing-a-long was hosted by the Lawrence County Historical Society in honor of Waring and long-time Ironton High School music teacher, Nell Urick, on Saturday.

“Fred Waring was known as the man who taught America how to sing,” Kay Rader of the historical society, told the group.

Waring was born in 1900 in Pennsylvania and started the Waring-McClintock Snap Orchestra. That eventually metamorphosed into Waring Pennsylvanians.

In the 1940s, Warring started summer workshops for teachers and other professionals.

“They met every summer with the idea of coming home and teaching his style of music,” Rader said.

“Music was a big part of high school,” Rader said. “We had Glee Club 1 and Glee Club 2 and mixed chorus.”

Urick, who grew up at 815 S. Seventh St., was one of eight children, born in 1908. She was especially close to her sister, Margaret, who taught English.

Each Christmas and spring Urick would stage massive concerts with upward to 150 high school singers taking over the high school auditorium, all dressed in formals. The Christmas concert was usually candlelight.

Senate to vote on gun control

WASHINGTON (AP) — Democrats get their long-sought votes on gun control a week after the massacre in Orlando, Florida, but... read more