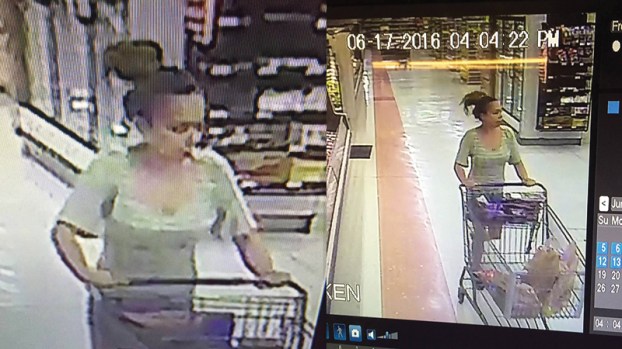 These stills, from security footage at the Proctorville Kroger, show a suspect wanted in connection with an alleged theft at the store.

PROCTORVILLE — Social media has led Proctorville Police to a suspect wanted in connection with an alleged theft at a local grocery store.

Sgt. Randy Thomson, the warrant officer with the department, said police had posted a video still from security camera footage of a woman suspected of stealing from the Proctorville Kroger.

“My understanding is that she stole a lot of meat,” Thompson said.

He posted the photo, along with a description of the vehicle she left the store in, a blue Hyundai.

He said the department received several tips and had identified and located the suspect and were in the process of charging her.

“It’s a great process to use,” he said of social media. He runs the department’s Facebook page.

The Proctorville Police have had success recently in using social media collecting fines and dealing with outstanding warrant, by posting photos of those who have unpaid fines or warrants against them and asking the individuals, or those who know them, to contact the police department.

In other news, Thompson said he recently made an arrest of a man wanted on several outstanding warrants, one of which dated back to 2009.

Thompson said Johnson, whose current address is in Las Vegas, was driving a vehicle with Texas license plates.

He was wanted on a warrant in Proctorville for unpaid fines.

Johnson was also sought on a warrant in Gallia County for violating probation on a forgery charge, Thompson said.

He also had warrants against him in Lawrence County, for aggravated menacing, and in Scioto County.

“I told you folks at court that sooner or later we would find you!” Thompson wrote on the department’s Facebook page. “And folks think a seven year old warrant is a waste of time.”