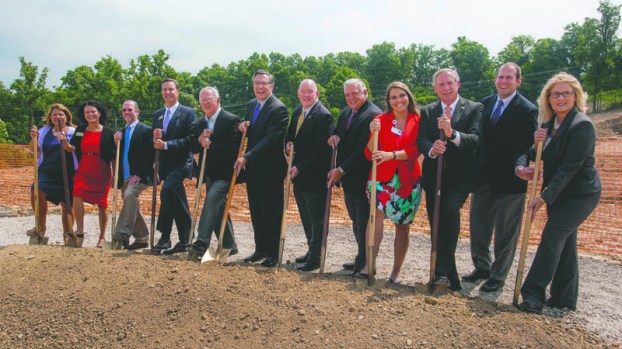 The groundbreaking ceremony for The Lantern at Morning Pointe Alzheimer’s Center for Excellence located in Russell, Kentucky, Tuesday morning.

Alzheimer’s patients have new place to get help

RUSSELL, Ky. — A groundbreaking ceremony took place Tuesday on a new facility dedicated to providing care for those with Alzheimer’s Disease.

A crowd gathered at the Morning Pointe, an assisted living community in Russell, to celebrate the launch of construction on The Lantern.

The new facility will offer 44 memory care apartments and will be licensed to allow for 50 residents.

The ceremony, in a tent adjacent to the existing facility on land purchased from Our Lady of Bellefonte Hospital, kicked off with the presentation of the American and Kentucky flags by Boy Scout Troop 112, followed by a rendition of the national anthem by The Singing Kernels of Ashland.

Farrow said he expects The Lantern to be open within a year. The Morning Point currently houses 63 residents, 20 of whom are battling Alzheimer’s Disease.

“When we open The Lantern, those residents will be the first moved over,” he said, noting that this will free up rooms at The Morning Pointe for additional care.

Greg A. Vital, the president and CEO of Independent Healthcare thanked the cities of Ashland and Russell, whose mayors were in attendance, for their cooperation in getting the project under way.

“We’re thrilled to be here today to officially start turning the dirt and get started,” he said.

Russell Mayor Bill Hopkins said The Lantern will allow residents to maintain their independence as much as possible.

“Choosing the way you want to live is important to everyone,” he said.

Ashland Mayor Chuck Charles pointed out that the facility will bring 60-70 new jobs to the area, while providing needed resources to deal with an issue affecting the elderly in the region.

“The 44 memory care apartments will add to the quality of life,” he said. “With 11 percent of seniors with Alzheimer’s Disease, it is the sixth leading cause of death in Kentucky.”

Vital said that the average age of a resident at Morning Pointe is 86, but he said that with increased life expectancy comes an increased risk of dementia and Alzheimer’s.

“If you reach the age of 90, there a one out of two chance that you will suffer some kind of dementia,” he said.

DeeAnna Esslinger, the executive director of the Alzheimer’s Association of Greater Kentucky and Southern Indiana, agreed.

“If you don’t love someone with Alzheimer’s Disease, you will,” she said.

She said facilities like the Lantern were needed for those who can no longer independently.

“As important as it is to remain home for as long as you want, it is important to have resources like Morning Pointe.”

Wanda Parker, the executive director of the facility spoke of things offered by the facility to help residents live with dignity, from specially-designed dining ware for those with motor impairments, to various therapy programs.

Parker’s work at the Morning Pointe was praised by David Meade, whose father has been a resident at the facility, after being diagnosed with Parkinson’s Disease and dementia.

“His condition demanded more than my family could provide,” he said. “We were not just interested in a good facility, we wanted the best for my father.”

He said the Morning Pointe had lived up to his expectations and provided quality care.

“The staff has treated my father with so much, respect,” he said.