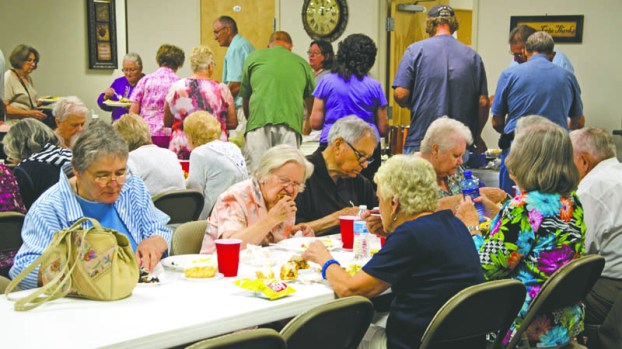 The Sybene-Chesapeake Senior Center hosted an ice cream social and Our Day lunch at First Baptist Church in Rome Township on Friday.

ROME TOWNSHIP — Guests attending the monthly “Our Day” dinners of the Sybene-Chesapeake Senior Center were treated to something special on Friday.

Homemade ice cream was prepared and served on site, courtesy of John Winters, of Ironton.

Following the meal, which consisted of hot dogs and covered dish items brought by guests, an ice cream social took place, and guests were handed cups of vanilla ice cream, made by Winters.

“He is making ice cream for the Bible School tonight,” Edna McClaine, Winters’ friend said. “He’s a good man, and does a lot of good things for a lot of people.”

The dinners have been drawing larger crowds each month, with this month’s event hosting about 100 people, center director Darlene Green said.

One of the attendees was Carl Rowe, of Ironton. A World War II veteran who served on the U.S.S. Midway, he said he comes to the events often.

In addition to the meal, guests were entertained, as is the case each month, by a musical guests, with Friday’s performance coming from Tom Dobbins, of South Point, and Bob Hardin, of Huntington.

Green said the dinners, which are open to the public, are held the last Friday of each month at the church, rather than the center’s Chesapeake location, in order to accommodate the crowd. Entertainment begins at 10:45 a.m. and food is usually served at about noon.

In August, she said the dinner will have a garden party theme.

“Anything out of the garden you can bring,” she said.

As for First Baptist Church, they will be hosting Vacation Bible School starting Sunday, from 6 p.m.-8:45 p.m. Classes will run through Thursday.

Hayley Haugen began her love affair with poetry when she was in high school in Los Angeles. Then a professor... read more