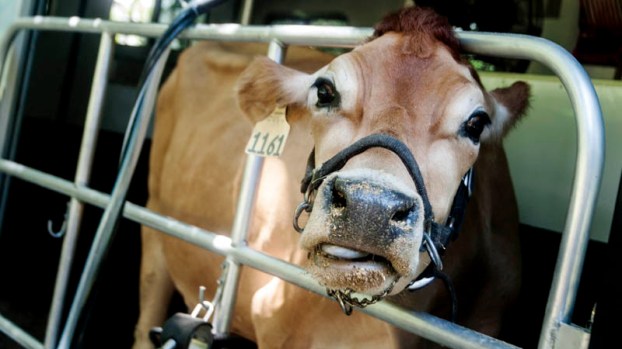 ASHLAND, Ky. — A crowd of children gathered in Ashland’s Central Park on Wednesday, and got a chance to see first-hand where the milk in their homes comes from.

A mobile dairy classroom, courtesy of Southland Dairy Farmers of Texas, was set up to give live milking demonstrations.

The children cheered as the trailer truck with the cow, a 1,000-pound Jersey named Jet, arrived. Before giving the demonstration, Michaela Sanders, with the company, gave a lesson on breeds of cows, the dairy industry and the products that come from it.

“Milk has nine essential vitamins and proteins that you and I need every day,” she said.

Sanders said a cow like Jet eats 56 pounds of food every single day, the equivalent of 300 Big Macs, produces five gallons of milk per day and needs to be milked daily. She said, like all mammals, milk is produced primary to feed the young.

“Cows make milk to feed their babies, but luckily, every dairy cow makes more than enough for all of us,” Sanders said.

After the lesson, Sanders showed the children how milk is produced at a modern diary farm.

After first cleaning the cow’s udders with iodine, she hooked up a four-clawed milking apparatus to Jet. She said that each claw contained an inflatable, which mimicked the movements of hand milking.

After turning it on, the milk was produced in seconds, filling a large glass jar mounted to the side of the truck.

Sanders pointed out that after a cow is milked, the product is then sent to a tank, where it is cooled to 36 degrees Fahrenheit. She said the milk from a Jersey is not as white as what is purchased at the store.

Once the milk is cooled, it is then tested for safety, pasteurized for preservation and homogenized to remove fat droplets and make it consistent.

The demonstration was an educational event sponsored by the Boyd County Library, as part of their annual summer reading program.

“It shows kids where they get their milk from,” Dawn Nolan, the public relations supervisor for the library, said. “Every step, from the cow, to the gallon at home.”

Sanders reminded the children of the work that goes into bringing a glass of milk to the kitchen table.

“Before you enjoy that cold glass of milk, remember that there’s a dairy farmer out there, working seven days a week, 365 days a year,” she said.

Italian restaurant set for July 1 opening in village PROCTORVILLE — A new restaurant is opening on July 1 in... read more