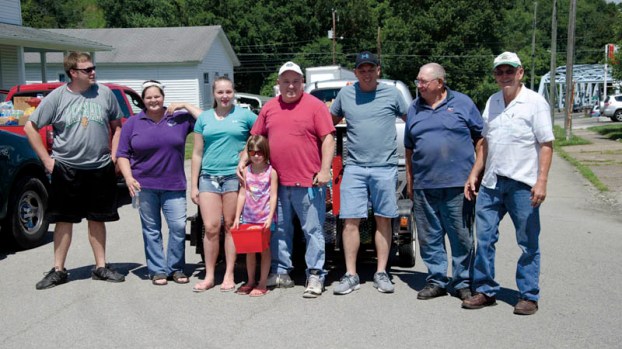 Members of the Chesapeake-Rome-Proctorville Lions Club collected more than $15,000 in donations to victims of the recent West Virginia floods. The three-day drive was organized by Cory Slack, pictured at far left.

CHESAPEAKE — Members of the Chesapeake-Proctorville-Rome Lions Club have been collecting items for people in need in their neighboring state.

Members of the group and volunteers from the community were loading up supplies on Thursday at the foot of the Robert C. Byrd Bridge, and preparing to drop them off for victims of last week’s West Virginia floods.

“People were coming by, then going to the store and coming back,” Paul Hart, who serves on Chesapeake’s village council, said.

The drive began on Monday and was organized by Cory Slack, whose parents run Slack and Wallace Funeral Home in South Point.

“He’s really the one who spearheaded this,” Hart said.

The group was at the site, at Hart’s Garage, for four hours each day, taking donations. Altogether, they collected more than $15,000 in supplies, which will be dropped off at the Ohio Valley Environmental Coalition in Huntington.

The June 23-24 floods dumped more than 8 inches of rain on West Virginia, leading to 23 deaths and destroying hundreds of homes. Some of the hardest hit towns were Richwood, in Nicholas County, Rainelle, in Greenbrier County, and Clendenin, in Kanawha County. Gov. Earl Ray Tomblin declared state of emergency in 44 of the state’s 55 counties. President Barack Obama declared the state a major disaster area following the floods and has ordered federal aid to the region.

Converting the majority of county vehicles to running on propane would produce savings of $1,781,087 over a 15-year period, according... read more