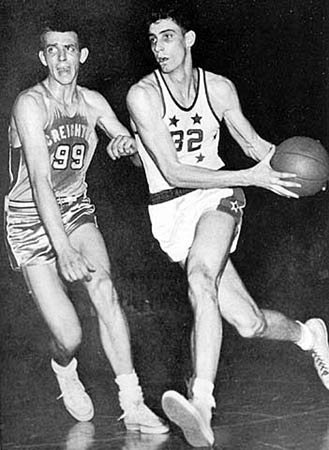 “It is an absolute thrill to announce the inaugural class for the Small College Basketball Hall of Fame,” Hall of Fame and SCB Founder John McCarthy said in a statement released Thursday morning.

“This class represents the best of the best in the history of small college basketball, and it is with great pleasure that we announce this class.”

Francis scored 1,954 points his freshman season for an average of 50.1 ppg and led the team to a 39-0 record. The following season, he totaled 1,319 points for an average of 47.1 ppg to lead his team to a record of 21-7, with many victories over major college programs (Wake Forest, Miami, Arizona State, Creighton, Providence, and more).

Francis, who passed away after a battle with esophageal cancer on June 3, 2015, scored 3,273 points and shot 68 percent from the field in his two-year collegiate career. He became the most popular player in the world during this period, and is credited with saving his school from bankruptcy.

The new Bevo Francis Award, now awarded to the player with the finest season within Small College Basketball, is named in his honor.

“It is important to note the tremendous amount of time and effort put forth from our Hall of Fame Committee,” said McCarthy.

“This process has taken months and months of research, discussion and exchange of information. Through this committee, we established the criteria, the process and the timeline, and that was before we began the actual selection of this Hall of Fame class. This prominent committee spent a great deal of time with this process, and I am incredibly grateful.”

“These are the legends from the 50’s, 60’s and 70’s who made an indelible mark at their schools as national renowned collegiate players and coaches.”

In terms of criteria for selection into the Small College Basketball Hall of Fame, the committee used the following basic guidelines:

• Must have played, coached or contributed at the small college level (four-year, non-NCAA Division I)

• Focus is on accomplishments/contributions specifically at the collegiate level

• Each Class will have a minimum of one inductee from each of three categories: Player, Coach and Contributor.

• All players, coaches and contributors that have not been inducted into the Small College Basketball Hall of Fame will continue to be eligible for annual consideration, as long as they meet the above guidelines. There is no timetable whereby candidates rotate off/out of consideration.

Through the creation of the Hall of Fame, Small College Basketball seeks to bring great attention to the game of basketball at the small college levels.

“Through the years, there have been so many great players, coaches and contributors that have been involved in our game at the small college level,” said McCarthy.

“Through the creation of the SCB Hall of Fame, we will pay tribute to them, and recognize their accomplishments on a national scale.”

If you are interested in nominating a former SCB collegiate student-athlete, coach or contributor for the Hall of Fame, please submit information to scbhof@gmail.com.

For more information about Small College Basketball, please visit the website at www.smallcollegebasketball.com.

WASHINGTON (AP) — There are plenty of reasons why the Cincinnati Reds have lost eight of nine and are in... read more