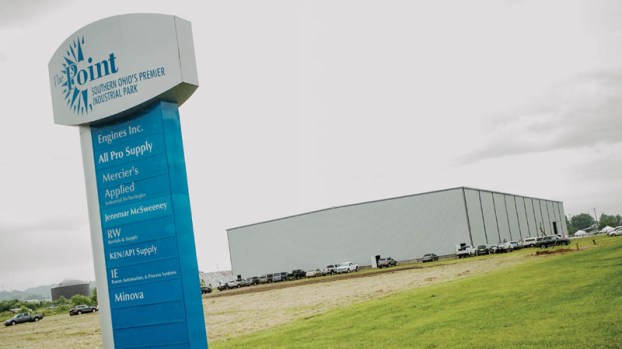 A new 58,000 square foot spec building is off of County Road One, in South Point, at The Point industrial park. This building is one of 10 buildings located at The Point constructed by the Lawrence Economic Development Corporation.

‘The LEDC’s idea was to take a green field and turn it into an industrial park,” Dr. Bill Dingus, executive director of the LEDC, told the audience at the building off County Road 1.

For the past 12 years the LEDC has constructed spec buildings with the goal of attracting a variety of manufacturing firms to the industrial park.

There is a possible tenant for the 58,000-square-foot building that is covered in a specialty paint that looks like aluminum. It is designed for expansion with two 80-foot bays and a 20-ton crane in each bay. It stands on a four to eight acre lot.

“This is what we are doing for our community as far as jobs, when you look at the first 10 buildings,” he said. “This is a joint effort for the county. Now Realtors are seeking us out.”

Right now there are between 750 to 775 jobs at The Point, once the site of the former Allied Chemical and Ashland Inc. ethanol plants in South Point..

“This was the vision the board and the community had when they put the Point here,” Dingus said. “It has the potential.”

Prosecutor’s opinion instructs auditor to write checks The remainder of the county’s gasoline bill to Speedway has been paid following... read more