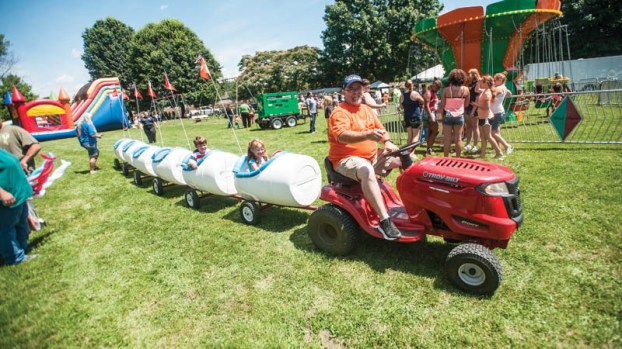 Children take a ride while attending the annual South Point’s Party in the Park event Saturday.

Couple reaching out to veterans

SOUTH POINT — While children took in the rides or slurped snow cones as their parents checked out the car show, Cassandra and Scott Tierney were at the South Point park for another reason.

They wanted to tell as many as they could about their new organization, Vets Helping Vets. That’s why they set up a booth at this summer’s Party in the Park.

“We want to help vets with information, utility bills, housing and furniture,” Cassandra said. “We go out to different locations to raise money.”

Scott is a 10-year Army veteran and the couple started talking about starting the organization about a year ago. When Scott retired in October, they decided now was the time.

“A lot of vets don’t know what information is out there,” Cassandra said. “We try to help them.”

The couple recently moved to South Point and have a 40-acre place that they open up to veterans as a kind of wilderness retreat at no charge.

“Anything we can do to make lives better,” she said.

They also want to raise money to build a therapeutic riding center for veterans.

This was the third year for the South Point Party in the Park that ended Saturday night with a fireworks display. The Tierneys have come to the event for the past two years just as visitors. This time they were hoping to get help to fund their efforts for veterans.

“This is a good way to know your neighbors and community members,” Cassandra said.

PROCTORVILLE — It was a packed house in the first hour of business for a new restaurant in Proctorville on... read more