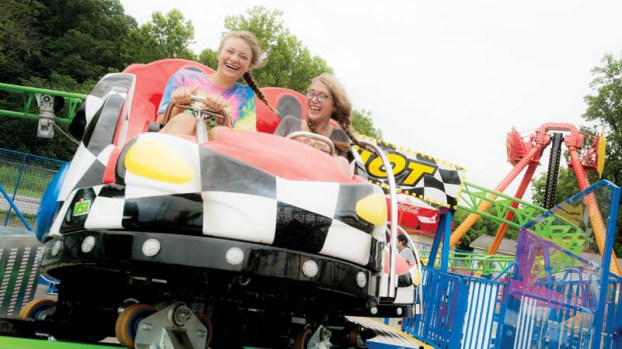 Timber, left, and Catherine Wilson, right, have a great time on the Slingshot ride at Camden Park.

HUNTINGTON, W.Va. — Camden Park is open for its 102nd summer season, and visitors to the park will see a new ride among the attractions.

The Slingshot was ready for its first passengers when the park opened in April.

Shawn Wellman, the operations supervisor for the park, said it is a “hybrid” of a rollercoaster and an amusement park ride. It seats about 16 people in the four coaster cars which rotate as they make repeated passes around sloping figure eight track.

“It’s a mainly friendly ride for all ages,” Wellman said, noting that anyone between the heights of 36 inches and 6 foot five can ride.

He said the Slingshot, which was purchased new and has not appeared at another park, has been popular with visitors so far and has become one of the park’s top attraction, along with the Rattler, in which passengers are suspended and spun on a swing, an addition from four years ago.

When asked what most visitors like, Wellman said, “It’s a little bit of everything.”

“There’s the Big Dipper, the Haunted House, the Log Flume,” he said. “There’s stuff for all ages.”

He said the lack of long lines at Camden Park is a big draw for many families.

“It’s not like Kings Island, where you have to wait hours,” he said. “The longest wait here is about 30 minutes.”

Wellman said the park’s rides undergo rigorous safety inspections each season and are certified by the state for operation.

Camden Park has a number of vintage rides that draw amusement park enthusiasts from across the country.

The Big Dipper and the Little Dipper, the parks two roller coasters, are two of the last remaining roller coasters in operation built by the famous National Amusement Device company. Constructed in 1958, the Big Dipper still features the original cars on its wooden track, part of which was recently refurbished.

The Haunted House is one of only two rides featuring a gravity-fed pretzel track still in existence in the United States, while the Whip, built at Coney Island is one of the last of its kind. Whip rides were popular in the 1910s and 1920s, and made notable appearances in silent films starring comedians such as Fatty Arbuckle and Harold Lloyd.

The park has a busy season planned with several events coming up.

The annual Fourth of July celebration will feature music from Deer Creek, Woody Pines and Appleseed Collective, as well as fireworks.

Every Thursday, Friday and Saturday through July 30, the park’s hours will be extended to 10 p.m. as part of Hot Summer Nights, with music performances scheduled from The Tillers on July 14 and 15, Caravan of Thieves on July 21 and 22 and Woody Pines on July 28 and 29. Fireworks will take place each Saturday.

The summer season wraps up on Labor Day weekend, from Sept. 3-5, with performances from Ma Crow and The Lady Slippers and fireworks.

In October, the Halloween Spooktacular is scheduled. The park will remain open every Friday and Saturday, decorated for the holiday, along with special attractions such as the Haunted House Walk Thru and the Haunted Train Ride.

The day hell came to earth

SCOTTOWN — Sgt. Steve Cartmell had just started as a road deputy for the sheriff’s office when he got a... read more