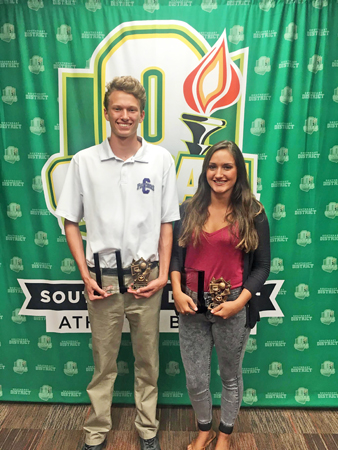 In addition to the four scholarships awarded by the Ohio High School Athletic Association the Southeast District Athletic Board (SEDAB) is proud to award an additional twenty-one scholarships to the deserving scholar-athletes in Southeast Ohio.

The SEDAB is pleased to announce Wesley Stephens of Chesapeake High School has been awarded the OHSAA Scholar-Athlete Scholarship in the amount of one thousand ($1000). Wesley plans to enroll at Lipscomb University in the fall and study Pharmacy.

Fairland High School senior Taylor Perry was also honored as a Scholar-Athlete for the Southeast District.

The OHSAA and SEDAB scholarships are awarded to student-athletes who have excelled academically and athletically. To be nominated by their high school students must meet the following criteria: must be a graduating senior; have a grade point average of 3.25 or higher on a 4.0 scale; must have taken either the ACT or SAT; must have received a minimum of three varsity letters in one OHSAA sanctioned sport or four varsity letters in a combination of any two or more OHSAA sanctioned sports

Reds enjoy big day as they down Cubs 9-5