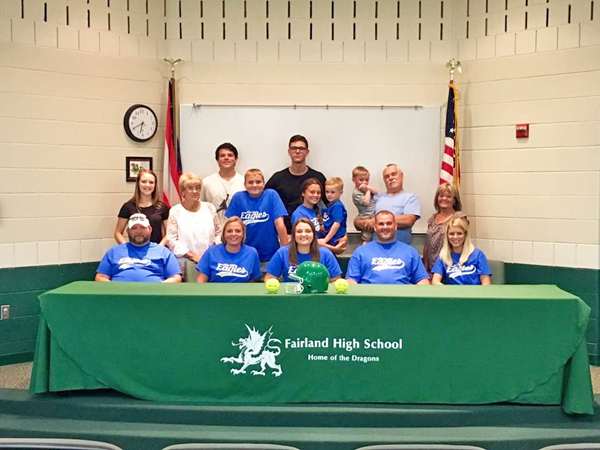 PROCTORVILLE — A few years ago, Maddy Kazee wasn’t sure she would keep playing softball. Now she has made plans to extend her career.

“There’s a point in time a couple years ago when I was debating on to keep playing or not. My heart got back into it,” said Kazee.

“I have to work at it. I want to play at it for all four years.”

Fairland Lady Dragons’ assistant coach Jason Morris said he could see the potential in Kazee to play at the college level.

“You see kids you think are good and have some talent and could go someplace and play. You see some kids that you automatically know if their head’s into it there’s no doubt about it. I knew she was ready to go to the next level,” said Morris.

“I didn’t know much until she came for a visit and a workout. She’s a good player and I think it’ll work out for us. It’s a rebuilding year for us,” said Hall.

While Kazee would prefer to play centerfield, Hall plans to test her first in the infield.

“She’ll be at third base and then DH some. But right now it’s free game for all nine spots on the field. I don’t know for sure where anybody is going to be right now,” said Hall.

Kazee said she was waiting on her final transcripts to be submitted and accepted at Alice Lloyd.

She didn’t hesitate to explain why she picked the Lady Eagles.

“My friend is going there,” said Kazee or teammate Allison Shepherd who signed with Alice Lloyd back in March.

“I like playing with Allison. At least I’ll know somebody up there.”

Morris not only coached Kazee in high school but in the youth summer leagues.

“I’ve coached Maddy since she moved to town when she was 10-years old. She’s always been an aggressive ballplayer,” said Morris.

“She loves the game. Maddy started playing the ball when she started loving the game. Once she did that, you could just tell she was made to play the game. I told her when she was a freshman — we were having a little trouble in the outfield — she was a great shortstop and I said, ‘let’s try centerfield.’ She said ‘I don’t care. I’ll play anywhere.’

While Kazee is willing to play any position, she admitted that “I feel more comfortable (in the outfield). I just want to play.”

“She said, ‘Any spot you need me, that’s where I’ll play.’ We could play her anywhere. We used her at cleanup in batting. She delivered well. She was a fun kid to coach,” said Morris.

Kazee plans to major in business and accounting.

Cincinnati Reds pitcher Anthony DeSclafani works against the Chicago Cubs in the first inning on Wednesday at Wrigley Field in... read more