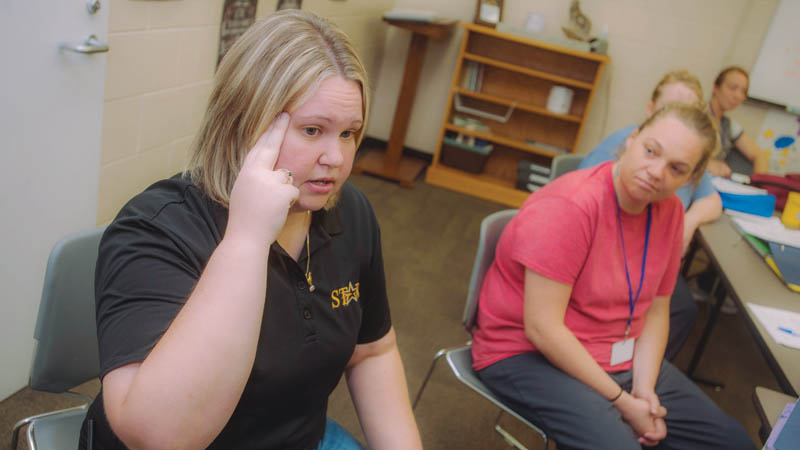 Ashley Witt knows all about pain — how to absorb it, how to inflict it, and, most importantly, how to help others walk through it.

Today, she uses her life experiences to work with felony offenders, many of whom have traumatic pasts, as a case manager and teacher at STAR Community Justice Center in Franklin Furnace.

Rewind to November 1994, the beginning of the road that led her to care so much about helping people overcome tragedy. Then 7-year-old Ashley endured life’s first blow when her parents divorced. Her father remarried a week later to a woman with two children, one of whom was a year older and shared her first name.

A short time later, the month of April 1995, had a more vicious blow in its plans.

“I was at my grandparents’ (Carl and Carol Witt) house in Ironton playing basketball with a friend,” she recalled. “The ball bounced to a fence and I went to get it.”

Inside the 3-foot high enclosure was a Shar Pei that Ashley paid no attention — until the dog demanded it.

“I was walking back with the ball,” she remembered. “The dog jumped the fence and bit me on the arms and back.”

Carl ran outside, kicked the dog away, and rushed Ashley into his home.

“He took me inside and removed my sweatshirt,” she said, pointing to a 4-inch scar on her left arm. “My right arm just had puncture wounds, but my left arm was torn apart. Fat tissue was hanging out. Blood was everywhere. I kept asking if I was going to die.”

“I was still going to my dad’s every other weekend,” she said, noting she desperately craved her father’s attention. “But, even today, I’m not welcomed there.”

Her longing for approval from her father, coupled with the trauma of the dog attack, led Ashley to see a child psychologist named Vicky Riley.

“She taught me relaxation techniques and had a genuine interest in me,” Ashley recalled. “I got really close with her.”

Later in 1995, she decided to give martial arts a chance to help channel her emotions.

“I needed an outlet, because I was dealing with the divorce and the dog attack.” Steven Gillam was a martial arts instructor at Ohio University Southern who had no idea he was about to become one of the most important male influences in Ashley’s life. “He gave me structure and discipline,” she said.

“I’m not really sure what the bond is between us, but it was there from the very beginning,” Steven said, noting the duo is very close to this day. “I saw somebody who was an over-comer and over-achiever. She’s one of my surrogate children.”

“I needed a father figure,” Ashley said. “He was that and still is.”

Sticking with martial arts, ultimately becoming an instructor and earning a 3rd degree black belt, Ashley forged through her teenage years with Vicky and Steve as very important extended family members. Vicky eventually married and moved away, but kept in frequent contact with Ashley via letters and emails throughout her childhood and teenage years.

“She continued to be that confidante I could talk to,” Ashley said, adding Vicky, whose last name changed to Slaughter, surprised her by driving to Ironton to attend her 18th birthday party in December of 2004.

It was the last time she saw Vicky alive.

A senior in high school at this time, Ashley suffered yet another blow, missing five months of classes due to Vocal Chord Dysfunction, the abnormal closing of the vocal chords when a person breathes in or out.

“My vocal chords closed when they should open,” she said. “I couldn’t breathe.”

Despite missing most of her senior year, Ashley stayed on top of her course work and graduated fourth in her class. At the graduation ceremony, she delivered a passionate, goose bump-inducing speech describing the impact of her mother, Lynn’s, love and devotion on her life. A packed Tanks Memorial Stadium audience responded with a standing ovation.

In the fall of 2005, Ashley enrolled at the University of Kentucky, where she spent two years as a chemistry and pharmacy major. During her sophomore year, life dealt her another difficult hand.

“Vicky emailed me that she had been diagnosed with pancreatitis,” she remembered. “I didn’t hear from her for a while. Mom found her obituary online.”

Devastated by the news, Ashley and Lynn searched for Vicky’s family members and finally contacted her daughter, Tara Riley, via Facebook.

“When we contacted her, we told her how much her mom meant to me,” Ashley said, tears flowing as she spoke. “Tara told us she knew exactly who I was because my picture was on their refrigerator when she was growing up.”

Tara added that Vicky was buried with pictures of her children — as well as a picture of Ashley.

“I have three children of my own,” he said. “I consider her my fourth.”

“About a year ago, I was going through some old cassette tapes and found one named ‘Relaxation Techniques,’” Ashley recalled. “It was Vicky walking me through skills when I was a 9-year-old.”

In 2007, Ashley transferred to Marshall University and changed her major to secondary education with emphasis on science.

“Then I found my way to STAR,” she said.

Speaking of the tapes of Vicky teaching her relaxation skills, Ashley said, “The surreal part is these are the same techniques I teach at STAR. Things are coming full circle.”

She noted how proud Vicky would be seeing her protégée following in her footsteps.

“You don’t have to let your past define who you become,” Ashley said. “That’s something I tell STAR residents all the time.”

Who can argue the logic of somebody with experience?

“I want people to know that even though things like this happen in life, you can turn it into something positive and give back,” she said.

Steven agrees, having watched Ashley’s story evolve through the years.

“I’ve never been more proud of anyone in my life,” he said.

CHESAPEAKE — For nearly one year, a thrift store in Chesapeake has been helping those in need. Maxine’s Closet, located... read more