Johnson proves to be true scholar-athlete at UPike 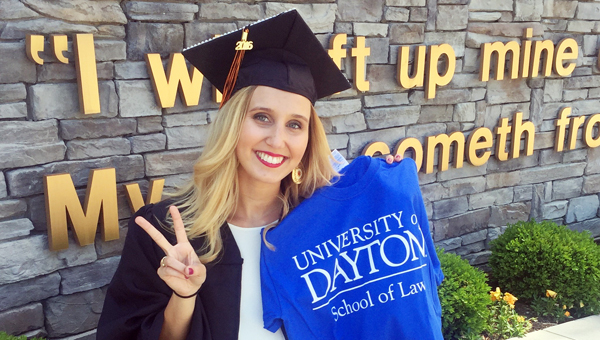 Former Coal Grove Lady Hornets’ volleyball player Haley Johnson recently graduated as valedictorian from the University of Pikeville where she was a four-year starter in volleyball and an NAIA and Mid-South Conference all-academic selection. (Photo Submitted)

COAL GROVE — Haley Johnson proved to be a real example of a student/athlete.

The former Coal Grove Lady Hornets’ standout not only played four years of volleyball for the University of Pikeville Lady Tigers, she posted some even more impressive numbers in the classroom.

Johnson graduated as valedictorian of her class with a 4.0 grade point average, the same GPA she posted when she graduated from Coal Grove. She earned her degree in communications and was named the top student in the department. She also had a minor in English.

Out of the classroom, Johnson was a four-year varsity starter in volleyball as a defensive specialist and libero.

“It definitely wasn’t easy. The first two weeks of college I felt I was over my head. But after that I just got into a routine,” said Johnson.

“I had my routine that school comes first, athletics comes second and my work comes third. If I had homework, maybe I can’t come into work.”

Johnson will continue with her education after being accepted to the University of Dayton School of Law as she pursues a law degree.

Besides her schoolwork and playing volleyball, Johnson worked between 15-20 hours a week in the school’s admissions office.

Johnson’s work in the admissions office also led her to give tours to prospective students. She was a SOAR ambassador one year and currently helps with the summer Upward Bound Program.

During the spring of her junior year, Johnson lived and studied in Washington D.C. where she worked at a lobbyist firm in an effort to be exposed to the many aspects of political life in the Washington Center academic leadership program.

“Then I went to (Washington) D.C. and I worked in a lobbying firm and thought I had other options. That whole semester I was having a great time. But then I took a lot of classes with lawyers and something hit me at the end of D.C. that I really wanted to go to law school.”

While playing volleyball and working, Johnson still maintained a 4.0 GPA and was an NAIA academic All-American and a Mid-South Conference All-Academic selection all four years.

Being a student-athlete produced memories in both areas for Johnson.

“I had a lot of great memories but when I walked across the stage and the president pressed the necklace in my hand that acknowledged me as valedictorian it was probably the best memory. It’s just great to know that the hard work finally paid off,” said Johnson.

On the court, Johnson said a win over Kentucky Christian University and coach Bruce Dixon on Senior Night proved special.