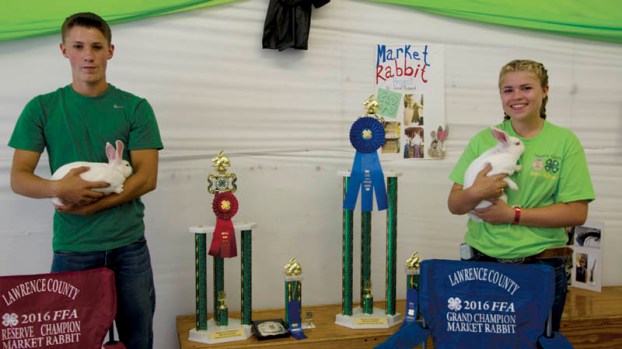 Corey Shope, left, was the reserve champion in the rabbits competition. Montana Runnels, right, was the grand champion.

Perseverance and a good choice of animals were the secrets of success for this year’s market rabbit show winners.

Montana Runnels, of Scottown and a member of Greasy Ridge 4-H took the top spot in the 2016 rabbit competition. The 15-year-old has been in 4-H since she was 8.

She said she felt “great” about winning. She attributes her success to working with her animals every day at the same time on a regular basis.

What she likes about being a part of 4-H are the life skills she has learned.

“It shows you how to be responsible,’ she said.

Corey Shope, 16 of Pedro, took the second place prize of reserve champion in the rabbit competition.

He said he felt “pretty good” about his win and picked his animals because they looked the best out of the pen he was choosing from.

This was the first time he had shown rabbits though he has shown pigs and goats before.

4-Hers compete in market goats event ROME TOWNSHIP — The sounds of “baaahs” echoed throughout the main arena of the... read more