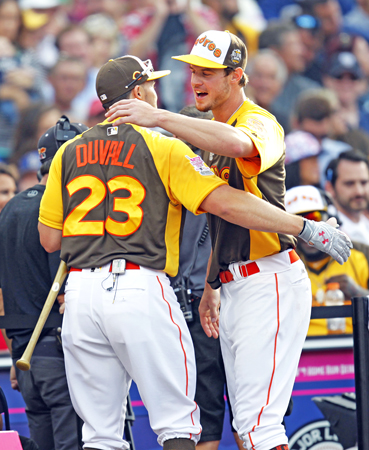 SAN DIEGO (AP) — For Adam Duvall, Jay Bruce, Julio Teheran and Eduardo Nunez, the All-Star Game is as close to the spotlight as they’re likely to get this season.

Their teams are far from contention, on track to lose 100 or more games.

“Obviously it means a lot. But it would be better if we were winning or playing better as a team,” said Duvall, whose Cincinnati Reds are 32-57.

“But this is where we are in this stage of the process. We are rebuilding, and Cincinnati has been very vocal about that. I think we have a lot of the pieces of the puzzle. We have a very good foundation and we are doing the things necessary to be successful in the future,” he said.

Bruce is also on the Reds, who haven’t won a title since the 1990 Nasty Boys team and seem years from contending again.

“I will consider myself a Red until I am no longer in uniform,” he said. “Remember, I was traded last year and it didn’t happen and here I am an All-Star with the Reds. If the Reds think it is in the best interest of the organization, that they can maybe get better, they will do it.”

Teheran’s Atlanta Braves are 31-58, the worst record in the majors, a team that stripped down in preparation for next year’s move to suburban SunTrust Park.

“It’s kind of been a hard year. We have been an up-and-down team,” the pitcher said. “But it’s something you don’t think about it. You only control what you can control. I know I don’t have a lot of wins but I’m going to keep doing what I do and that is to go out there and get people out. It doesn’t matter if you have run support or not. You have to help your team win.”

“We are struggling, we know that. But we have to see the good side and I’m here trying to represent my team and my fans in Minneapolis,” he said. “Yes this is the highlight. I was very excited. I didn’t expect it. I went from looking for more playing time to making the All-Star team is amazing.

The former Yankees infielder has 12 homers and 40 RBIs.

“You can’t control numbers. You work to get good numbers but you don’t have any control. The opportunity was very big for me. It made a big difference,” he said.