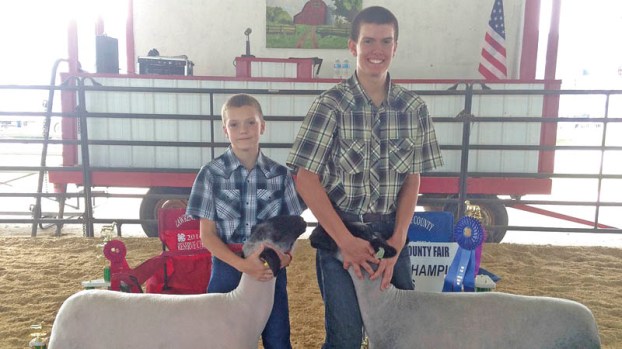 Brothers have the chops

ROME TOWNSHIP — The judge in Tuesday’s lamb showmanship competition at the Lawrence County Fair said showmanship is a state of mind.

“It’s not a switch you can turn off and on,” said Brad Terhaar, of Richmond, Indiana.

Terhaar also said lambs are the most difficult animal to show because they are truly a “hands-on experience.”

“You actually put your hands on the animal,” Terhaar said, rather the using a harness or other leading implement. “A lamb is very sensitive. It can tell if you’re nervous.”

Nervousness must not run in the Cade family. But as it happens, winning does.

“It’s a lot of work,” Levi said. “I’m outside every morning, working with my lamb, talking to other sheep showers to see where I need to improve.”

At one point, Terhaar noted for the crowd that young men like Levi aren’t built for showing lambs, since they are generally taller and have longer legs. Levi proved the judge wrong yet again by showing a breeding lamb, which was quite a bit shorter than his market lamb. He was the winner and sole competitor that category.

“I’ve done it since I was little so it just comes natural,” Levi said.

Jacob said he was excited to win the junior title.

“I was pretty happy,” he said.

Jacob also said the key to winning was practice.

“We practiced a lot at the house,” Jacob said. “We have a ring around at the barn and we walk them around.”

In the market show, their middle brother, Ethan Cade, 15, took the grand champion award, while Jacob, who last year came in last in the competition, won the reserve title.

“It felt really good, especially to beat my brother,” Ethan said jokingly. “I just worked hard with my lamb.”

The brothers all said that while they are in competition with each other, they are still supportive of one another.

“We always work together,” Ethan said.