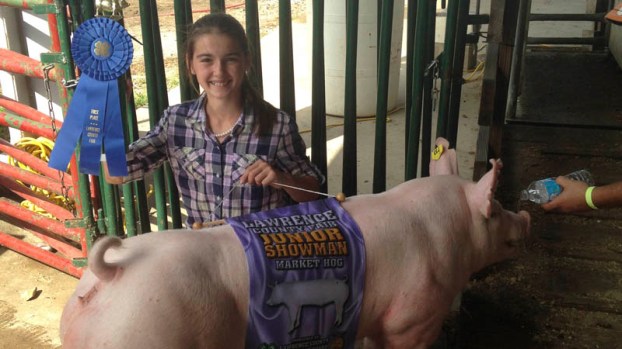 ROME TOWNSHIP — At Thursday’s junior hog showmanship competition, it all came down to who best got their animal in front of the judge.

“Who is quick to get their pig out in that empty space to show me,” said judge Dan Frobose. “(The winner) was very good at following my position in the ring.”

The Willow Wood Wrangler took the top prize, saying after she left the ring that she heard the judge’s advice for the senior competitors and took it to heart.

“I heard him asking for it,” Adams said. “I thought, if I could do it, he would really like it and place me higher.”

Showing a hog is different than any other project at the fair. There are no harnesses to lead the animal and no way to hold onto them by hand. Showers use canes or whips to guide the hogs around the area, which can be a challenge at times, Adams said.

“Getting them to cooperate,” Adams said about the hardest part of showing a hog. “It does its own thing. You have to take control over it.”

Adams said she prepared for this year’s show by practice with her hog once or twice a day, being sure to spend time with it so it was comfortable with her and the whip.

The 18-year-old Arabia All-Stars member said this could be her last year competing if next year’s college schedule prevents it.

“It feels nice, because if it is (her last year), I have something to remember it by,” she said.

Hatfield has placed first in her class in previous years, but this was her first overall showmanship award.

“I worked with my pig a lot, so I felt confident going in,” Hatfield said, who also said she studied other hog showmen techniques.

Hatfield also said the hardest thing about showing hogs is the animal’s lack of cooperation in the ring.

“When it gets hot, they don’t want to do much,” she said. “You only have a whip and they have a mind of their own.”

Keeping in mind this could be her last year competing at the Lawrence County Fair, Hatfield had some advice for the younger generation.

“Work before you get to the fair and stay calm in there,” she said. “Don’t get frustrated and have fun.”

Geared to clear out area eyesores The county’s land bank designed to demolish eyesores and abandoned properties has received the... read more