Reds have potential to improve during second half 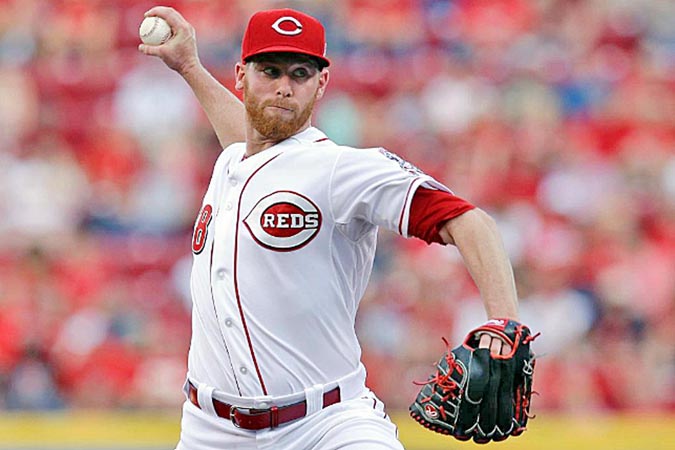 Anthony DeSclafani has been the Reds’ best starting pitcher since rerturning from an injury at the start of the season. (Courtesy of the Cincinnati Reds.com)

The Cincinnati Reds accomplished quite a few things in the first half of the season, but most of them were unwanted.

Next we go to the pitching. With injuries to the starting staff even before the season began, the makeshift rotation also weakened the bullpen and that led to some more dubious performances.

So far this season the Reds have allowed 154 home runs and that is also on a pace to break the record mark of 241 set by Detroit in 1996.

The bullpen has served up 66 home runs in 32.5 innings including 18 by the first batters faced by a reliever.

But all is not gloom and doom. In fact, there might even be hope for the Reds in the second half.

Outfielders Jay Bruce and Adam Duvall made the All-Star team on the strength of impressive performances through 89 games. Zack Cozart has bounced back from a season-ending knee injury last year to post some good offensive numbers and is one of the bright spots on defense in the infield.

We’ll have more on the defense later.

Joey Votto went through the two worst months of his career to begin the season but has raised his batting average from just above .200 to .252 with 14 home runs, 38 runs batted in and 48 runs scored.

Billy Hamilton was below .200 and is now sitting at .236 thanks in part backup outfielder Tyler Holt who has shown flashes of talent and has made the speedy Hamilton focus better and pick up his game.

Third baseman Eugenio Suarez started the season hot but has struggled after the first month or so of the season.

Even though the Reds lost starting catcher Devin Mesoraco and his power bat early with another injury — he sat out most of last year as well — they have gotten more than they hoped from Tucker Barnhart who is now batting .269 and has proven to be one of the best defensive catchers in the league.

Well, we’re back to defense. Votto is shaky at first — try getting in front of the ball Joey — and yet he’s still better than Suarez at third base.

The Reds may tinker with the idea of bringing Duvall back to the infield where he began his career and replace Suarez at third base.

They can use either Kyle Waldrop or Holt in left field or bring up No. 1 prospect Jesse Winkler, a left-handed hitter who hits for power and a high average.

Brandon Phillips may be the hardest worker defensively not only on the Reds but in baseball. But Father Time is catching up with him and he has made errors on some routine ground balls that he used to catch in his sleep.

The Reds wanted to put Jose Peraza in his spot but when Phillips refused to be traded in the off-season they couldn’t afford to sit down Phillips and his $13 million salary.

It’s commendable that Bruce and Phillips want to remain in Cincinnati during a time when players jump teams as soon as someone offers them a few extra dollars. But Bruce said he would accept a trade to a contending team if the trade benefited the Reds.

However, pitching is and always will be the key.

Anthony DeSclafani is the team’s best starting pitcher, that is until they bring up Robert Stephenson. With Homer Bailey about ready to return to the rotation, those three plus Brandon Finnegan and Cody Reed will give the Reds a young but promising rotation.

It also leaves Michael Lorenzen, Raisel Iglesias, Blake Wood and Tony Cingrani to make up a much-improved bullpen. John Lamb could become the long reliever and the Reds may opt to keep Ross Ohlendorf.

All that could make Dan Straily expendable and teams looking for a starting pitching down the stretch run should come calling.

The talent level of the Reds isn’t that far away from being a good team, it just lacks maturity and consistency.

Although the Reds won’t become a contender in the second half, they could use the time to help develop a team that could make great strides next season.

You know the old saying. It’s the Chicago Cubs’ motto, “Wait Till Next Year.” Let’s just hope the Reds don’t wait 71 years to make the World Series or 108 years until their next World Championship like the Cubs.

Talk about an unwanted accomplishment.