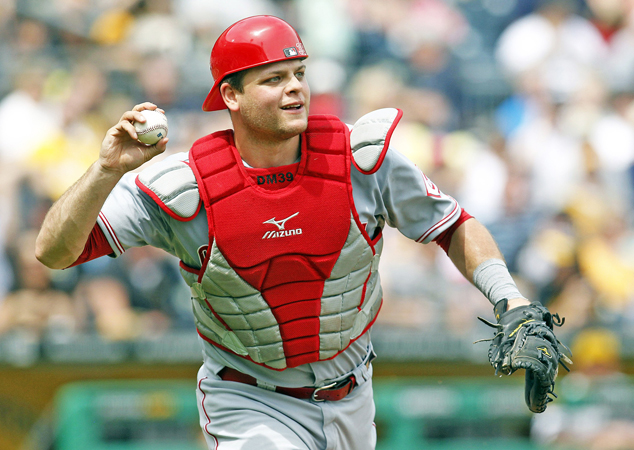 Cincinnati Reds’ catcher Devin Mesoraco had hip surgery on Monday and will miss the rest of the season. (Courtesy of the Cincinnati Reds.com)

CINCINNATI (AP) — Reds catcher Devin Mesoraco had surgery on the right side of his hip Monday, the third major operation in little more than a year for the former All-Star.

Mesoraco already was on the disabled list following surgery May 10 for a significant tear in his left shoulder. His latest surgery will prevent him from catching again until January, meaning he most likely won’t be at full strength when spring training begins. The Reds think he could be ready for opening day, barring setbacks.

The 28-year-old catcher had surgery on the other side of his hip last season, limiting him to 23 games. Cincinnati manager Bryan Price said there’s no indication the hip problems would become a chronic issue.

“I haven’t been told anything about him being at risk,” Price said. “We certainly would like him to stay healthy and keep him on the field. It’s always a crapshoot with any player. Hopefully, what he’s doing is putting all this behind him so he can string together some healthy seasons.”

Dr. Timothy Kremchek, the team’s medical director, said Mesoraco’s left hip has recovered nicely. He started having some problems with the right side of the hip during spring training, and doctors agreed that he would need surgery on it at some point as well. When he needed the shoulder surgery, doctors suggested that Mesoraco get the hip repaired as well.

“We had talked about when his shoulder was healed enough to be able to handle crutches, we would talk about addressing his right hip,” Kremchek said. “What we didn’t want to do was for him to have problems in his right hip, say, the middle of next year or the end of next year.”

Kremchek said Mesoraco will have more range of motion after the latest hip surgery.

“I think this will give him a spring in his step,” Kremchek said. “It’s going to make it a little easier for him to squat down and do things. So I’m optimistic this is going to make him a better catcher and be less stressful on his body.”

The former first-round draft pick had one of the best seasons by a Reds catcher in 2014, hitting 25 homers and driving in 80 runs. He also made his first All-Star team that season.

He’s the second Reds player to sign a big deal and then suffer serious injury. Right-handed starter Homer Bailey agreed to a six-year, $105 million deal before the start of the 2014 season. He needed Tommy John surgery in May 2015 and hasn’t fully recovered. Bailey is on a minor league rehab assignment, and the Reds are hoping to get him back in August.

CINCINNATI (AP) — Joey Votto’s hitting has finally come around midway through the season, just like it did last year.... read more