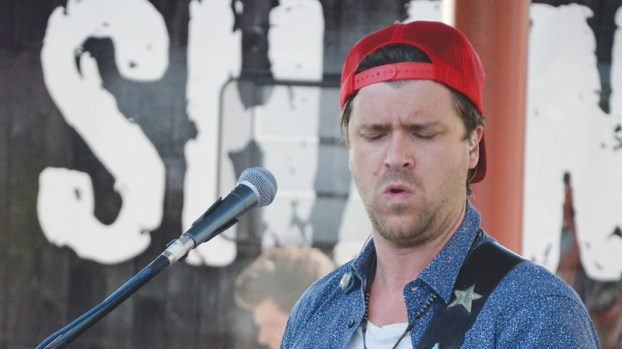 Shane Runion performs at the Ironton Farmers Market as part of the Glockner Summer Concert Series on Tuesday.

The humidity and heat didn’t deter music fans from the Ironton Farmers Market on Tuesday.

Dozens came out to enjoy a performance by Portsmouth musician Shane Runion, as part of the Glockner Summer Concert Series, organized by iHeart Media.

Runion, 29, performed a mix of country covers and original material, accompanied by a drummer.

A former school teacher with Greenup County Schools, he said he has been playing music on the road for several years now.

“I’ve been loving music all my life,” he said, adding that a lot of people consider his music to be reminiscent of John Mellencamp.

“A lot of people give me the Mellencamp reference, and I’m flattered,” he said.

Runion won an emerging artist honor from the Country Music Association Awards and has released two albums and has toured heavily throughout the Midwest and East Coast.

“We started in the Tri-State and are expanding,” he said. “We get around.”

More information on Runion and his music can be found at www.shanerunion.com.

His performance was the latest in the concert series, hosted every Tuesday from 6:30-8:30 p.m. at the market.

Helping people to beat the heat at the event were members of Greater Faith Apostolic Church, who were handing out free ice cream to concertgoers.

John Burton, the church’s assistant pastor, said it was a new outreach for the community.

RNC kicks off in Cleveland

CLEVELAND –– As delegates from all over the country flocked to northeast Ohio for the Republican National Convention this week,... read more