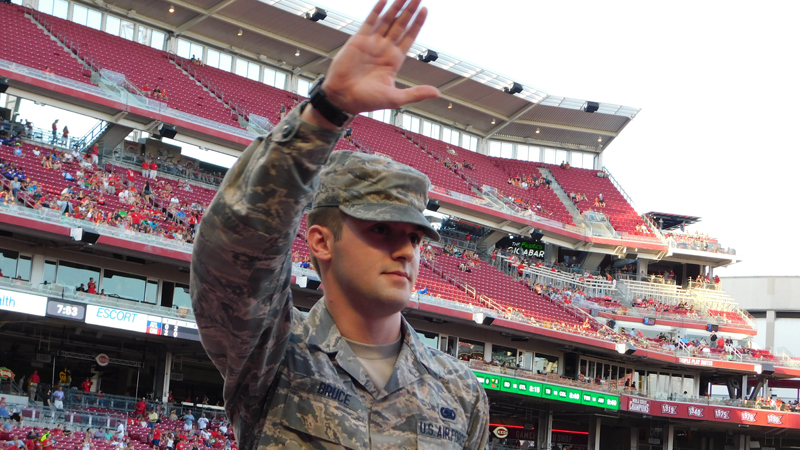 A1C Andy Bruce, recognized by the Reds as their Hometown Hero, receives a standing ovation during the Cincinnati/Atlanta game on July 19.

Remember the scene in “Rudy,” when Rudy’s father, knowing his son was going to be on the field in uniform, walked into Notre Dame Stadium for the first time and said, “This is the most beautiful sight these eyes have ever seen?”

On Tuesday, I had the pleasure of experiencing exactly what Rudy’s dad felt from a totally different perspective.

Let me rewind a few weeks to fill in the pieces that, once put together, created a picture my son, Andy, and I will always cherish.

In late June, Rick Jansen, president of the Friends of Ironton, invited me to go to Cincinnati on July 19 to watch the Reds from the PNC Bank suite behind home plate. Ralph Kline, CAO assistant executive director, had procured four passes to the suite from PNC representative Simon Sotelo and asked Rick to ask me and another person to join them.

Shortly afterward, Andy, a huge Reds fan who just completed his first year of duty in the U.S. Air Force and recently received overseas orders, texted me to say he would be home for five days beginning on July 18. Knowing Rick and Ralph had a fourth pass to the PNC suite, I texted Rick to ask if Andy could join us.

Rick immediately responded, “Absolutely.” I told Andy. We were both excited. I’ve watched games from suites in Cleveland, Chicago, and in the Reds former complex when it was known as Riverfront Stadium. I was thrilled Andy would get the opportunity to experience the comfort and amenities a luxury suite adds to the experience of watching his favorite team play ball.

But Rick took it upon himself to add another dimension of awesomeness to this experience Andy and I already considered amazing. He contacted a Reds employee named Kiley Myatt asking to have Andy recognized at the game as the team’s Hometown Hero. And Kiley made it happen, although Rick kept the news from me at first.

On Thursday, July 7, I messaged Rick and said, “If the Reds are going to honor him, please let me know ahead of time.”

At about 9:30 p.m., he responded, saying Andy was indeed going to be recognized at the game by the Reds. I immediately called him, tears of joy and gratitude rolling down my face as he described what would transpire 12 days later. I barely slept that night, but on Friday I bounced out of bed full of energy, went to work and began a nearly two-week barrage of cramming my good news down the throats of my coworkers at STAR Community Justice Center. I hope they can forgive me.

I kept the news from Andy until the day before the game, telling him only that he needed to wear his uniform to the game so people in the PNC suite could take pictures with him. He bought the lie without question. Last Monday, we were sitting on my parents’ deck. He joked in a passive-aggressive manner, for about the fifth time, about how uncomfortable he was going to feel wearing his uniform to the game in 90 degree heat.

I broke and spilled the news. Suddenly, wearing his uniform to the game was no big deal.

Ralph, Rick, Andy and I walked into PNC’s suite at GAB approximately one hour before first pitch. Brats, mets, pizza and barbecued pork awaited us in stainless steel warmers. Cold beer, pop and water chilled in a nearby glass-front refrigerator. A balcony extended from the air-conditioned suite, which is next to the suite owned by Reds CEO Bob Castellini.

In the middle of the first inning, per Kiley Myatt’s instructions, Rick, Andy, and I went to the fan accommodation station to await further instructions. We were met by Andy’s grandparents, Charlie and Mary Jo Frazer.

Reds representatives led us to section 128, where we awaited the final out of the second inning. Then, Andy walked onto the top of the Reds dugout and was introduced to a crowd that respectfully rose to its feet and gave him an ovation.

Unlike Rudy, my son wasn’t carried from the field by teammates. But in the moment he stood on that dugout being honored by thousands of Reds fans, my pride meter pegged out. A year ago, I wrote about his leaving for basic training with such emotion my Man Card was nearly revoked.

On this day, emotions ruled again — but this time, they were all fueled by awe.

He came off of the dugout in a daze, saying, “That was the coolest thing I’ve ever experienced.”

The Reds tweeted his picture and profile, thanking him as their Hometown Hero. The Atlanta Braves, Tuesday’s opponent, responded to the tweet with a GIF of one of their players tipping his batting helmet in a show of respect.

When he walked the aisle after the Hometown Hero salute, throngs of people shook Andy’s hand and thanked him for his service. Following him up the stairs, all I could think was how thrilled I am about who he has become. He was riding one of life’s high waves, likely unaware of the positive impact it had on those who love him.

We reentered the PNC suite to another round of applause led by Deborah Williams, who also gave Andy a Zach Cozart bobblehead to add to his list of souvenirs.

Deborah said to me regarding Andy being honored by the Reds, “If that was one of my kids, it would make my heart melt.”

She nailed it. Mine was in a pleasant state of nonconformity.

An inning or so later, Phil Castellini, chief operating officer of the Reds, entered the balcony of his adjoining suite and thanked Andy for his service.

Andy changed into more comfortable clothes. He and I sat on the PNC balcony, enjoying the game — which, incidentally, did go to extra innings as I had hoped — and marveled about the people who made this unforgettable day happen, as well as the ensuing social media explosion.

The next day, Ralph Kline emailed me.

He said, “I just enjoyed seeing the two of you spending time together. It reminded me of Nathaniel (his son) and me at that age.”

A game the Reds lost, 5-4, turned into a lifetime memory for my son and me thanks to all of the people mentioned above.

I can’t thank them enough. 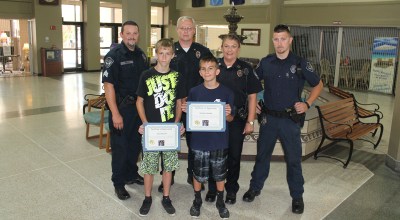