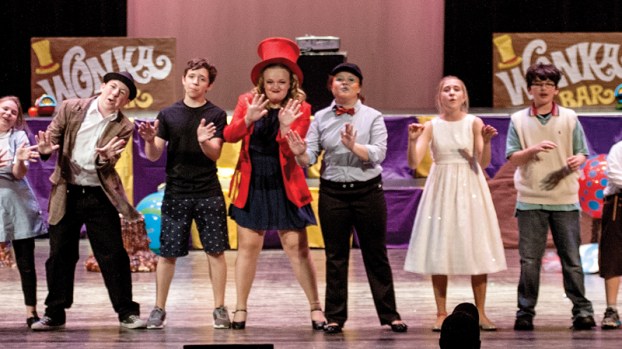 The cast of Willy Wonka Kids during the performance of the song “The Candy Man” during rehearsal at the Paramount Arts Center.

They have been at it for two weeks and, tonight, students in the summer production camp at the Paramount Arts Center will show their skills to the public.

A free performance of the musical “Willy Wonka Kids,” based Roald Dahl’s “Charlie and the Chocolate Factory,” is set for 7 p.m. at the theater on Winchester Avenue in Ashland.

Students at the camp have been learning about all aspects of production, from auditions, to set building, to costume making, to rehearsal, while under the direction of Michael Guida.

A professional actor who has worked on cruise ships, at Disney World and on the CBS series “Undercover Boss,” he is the Paramount’s resident artist.

He said the camp has a lot of repeat students from previous years, but many newcomers as well.

Guida said the crew and cast of 24, along with five volunteers, have shown remarkable talent in the 80 hours of rehearsal over two weeks.

“I think everything’s going great,” he said. “From what I’d been told, in the past they had never come this far in two weeks. They learned their lines quickly.”

He said the final rehearsals, taking place on Thursday, were mainly to get the technical side of things right.

The title character of Wonka is played by Hailey Browning, 14, of South Point, a return student of the camp who has performed with the Paramount Players for six years. This is her first time in the lead role.

“Oh, I love it here,” she said. “I’ve created all of my lifetime friendships here. It’s a great experience.”

The protagonist and lead character, Charlie Bucket, is portrayed by Xavier Stambaugh, 14, of Ashland, who is in his second year at the camp and has been acting for nine years, beginning with a performance in a production of “The Music Man.”

As Charlie, he gets to demonstrate his skills at everything from dialogue to song and dance.

“I think it’s a great experience,” he said of the camp.

He said that he and his brother have helped to build the sets.

“It’s been amazing to see what we built come together,” he said.

Bucket is one of the group of children invited to tour the chocolate factory of the enigmatic Wonka, with another being Veruca Salt, the pampered, bratty girl who is portrayed in a spirited performance from Claire Gussler, 15, of Ashland.

Gussler said she has attended the camp for six years. She started acting in the third grade in performance of “Wonka.”

“I was an Oompa Loompa then, so I’ve upgraded,” she said. “What’s cool for me about this is that I’m not much of a dancer, but I get to see a lot of dancing come to life.”

“I’m the one who spoils his daughter,” he said of the part.

Crouch said he is attending the camp while staying with his grandparents in Ironton for the summer.

“I’ve always been interested in acting, and me, my brother and sister have been in the camp,” he said.

Jasmine Smith, 13, of Louisa, Kentucky, portrays Mrs. Gloop, the mother of the gluttonous child, Augustus. While she does not have to take part in the singing, she did have to master an Eastern European accident for the part.

Smith, like many of the cast, is a returning student.

“I started in the sixth grade,” she said. “I’ve been in a few production camps. It’s been amazing.”

The production camp is an annual experience offered as part of the Paramount’s summer camps, which offer students a chance to explore arts of all types. Classes over the three weeks of the camp include drawing, dance, storytelling, cooking and video production.

Seniors make treats for summer holiday celebration   CHESAPEAKE — Dozens of seniors turned out Wednesday to get a... read more