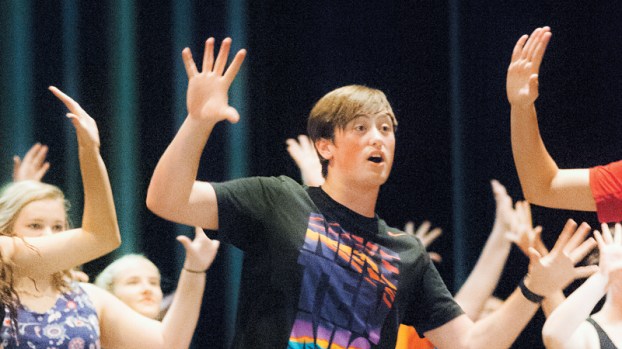 A popular Disney musical is coming to life at the Paramount Arts Center, just in time for its 10th anniversary.

“High School Musical” premiered in 2006 as a TV movie, becoming the most successful original film for the Disney Channel, inspiring two sequels and making stars of cast members such as Zac Efron, Vanessa Hudgens and Ashley Tisdale.

On July 29 and 30 at 7:30 p.m., more than 50 local cast members will star, under the direction of Josh Jannotta, in a production of the musical. Open auditions were held for the Paramount Players production back in May, and the cast, which includes a few members from Ironton, has been conducting final rehearsals this week.

Trevin Dutey, 17, who will be a senior at Ironton High School this fall, will take Efron’s role as Troy Bolton, the musical’s leading man.

Dutey says his acting experie nce includes several shows at his school. He said, at first he felt intimidated by taking the part in the Paramount’s cast.

“I was afraid, but everyone has been super nice,” he said. “It’s a close-knit cast.”

Alyssa Miller, 19, is a 2016 graduate of St. Joseph Central High and will attend Otterbein University in Westerville this fall, majoring in biochemistry and molecular biology.

Acting is not new to her, and she said she has starred in many musicals.

“I’ve been doing theater here at the Paramount for eight years,” she said, noting the positive experience she’s had in the theatre.

“Aside from the fact that it’s fun, it teaches people to step outside of their comfort zone and helps instill confidence,” she said.

Another veteran actor in the production is Hannah Tussey, who will be a senior at Ironton High. She’s playing the role of Taylor McKessie, one of the principal characters.

She said this is her 42nd show in a seven-year time span, with performances at both her school and the Paramount. She first starred in “The Sound of Music” in fourth grade.

This show will be one of her first roles as a lead, she said.

“I’m really thankful to have this one,” Tussey said. “I’ve never played a romantic counterpart.”

Tussey also works with the Paramount’s summer arts camp for children and teens, assembling costumes for the performance of “Willy Wonka Kids” set for Friday.

“I’ve loved it,” she said of her theater experience. “It’s been fun for me.

Jannotta said the performance will feature the music of the television film, in addition to a few new songs and will be suitable for all ages.

Coming from professional theater, he said he was a little worried, at first taking the assignment, but has been surprised.

“I’m really impressed,” he said. “The cast is doing great.”

More information can be found at www.paramountartscenter.com or by calling (606) 324-3175.

With one national party convention over and the other set for this week, the general election campaign is about to... read more