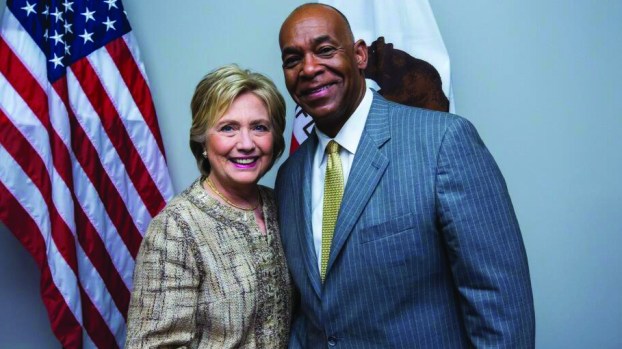 David A. Ford, an Ironton native, hosted Democratic candidate Hillary Clinton at a campaign event on April 16 at Southwest College in Los Angeles, where he serves on the school’s foundation board.

Ex-Huntington mayor serving as delegate for Clinton at DNC

PHILADELPHIA — As Democrats gather this week to nominate former U.S. Secretary of State Hillary Clinton for president, one Tri-State man will be among the delegates, while an Ironton native will be cheering her on from home.

Bobby Nelson is a former mayor of Huntington, West Virginia, legislator and Cabell County Democratic Party chair and is attending the convention at the Wells Fargo Center in Philadelphia as delegate for Clinton.

Of the remaining delegates, which went to Clinton, two were selected from the state’s third Congressional district, which stretches from Huntington, across the southern coalfields.

“They chose one male and one female, and I’m the male,” Nelson said.

Nelson said Monday’s events, which kicked off at 2:45 p.m., were reserved for business such as adopting the party platform, electing a chair and convention rules, followed by speakers in the evening, such as Sanders and U.S. Sen. Elizabeth Warren of Massachusetts. Clinton is set to formally accept her party’s nomination on Thursday night.

Nelson said he has long been an admirer of Clinton, pointing to her work as an attorney for “working families” after graduating from Yale and praised her advocacy of moving toward universal heath care.

“She was the one, back in the ‘90s, who was the spearhead of that effort for what we now know as the Affordable Care Act,” he said.

Nelson said Clinton has been effective as a U.S. Senator and secretary of state and said she is “the most qualified” candidate in terms of “experience, training and accomplishments” in the modern era.

“She’s unflappable and stays cool and organized,” he said. “And she’s a policy person who enjoys putting programs together and working to achieve results.”

When Nelson was interviewed on Thursday, he said a source had told him to “put it in the bank” that Clinton would select U.S. Sen. And former Virginia Gov. Tim Kaine as her running mate.

Of the Kaine pick on Friday, which turned out to be accurate, Nelson said he thought it was “an excellent selection.”

“He’s very well-liked and respected,” he said. “He speaks Spanish fluently. He may not be flashy, but one thing I admire about Hillary is that, while you hope for the best, you never know what could happen, and she chose someone who could step in and do the job.”

While not attending the convention, an Ironton native who has supported and met with Clinton will be watching the proceedings from California.

David A. Ford has lived in Los Angeles since 1997, but is “proud of my roots” and most of his immediate family still lives in the area.

As member of the foundation board at Los Angeles Southwest College, he was approached about hosting a rally for Clinton earlier this year.

The speech, which took place at the community college on April 16, focused on economic initiatives, such as raising the minimum wage, increasing minority and female business ownership and promoting the use of alternative energy.

Ford, who works for Southern California Edison, is also the vice chair of the John Ansen Ford Ampihtheatre in Hollywood and chair of the Greater Los Angeles African American Chamber of Commerce.

He said he will continue to back Clinton and said one reason he is supporting Clinton is that she would create continuity with the administration of President Barack Obama.

“I think there are some unique alignments to the current administration – polices and initiatives that will benefit the American people,” he said. “I think we have seen recovery since 2008, when we had the greatest collapse since the Great Depression. Stocks are up. Job could be better, but we are making progress.”

Ford said the moral conscience of the country has also been on the upswing under Democratic leadership.

“We’ve seen a lot of movement toward diversity of people in all walks of life,” he said.

Ohio’s Democratic U.S. senator, Sherrod Brown, who was one of the names considered by Clinton for the vice presidential slot, will address the convention this week. Also on the schedule from Ohio are U.S. Rep. Joyce Beatty, of the third Congressional district in the Dayton area, and Luke Feeney, who has served as Chillicothe’s mayor for the past year and has said he was chosen by the Clinton campaign as a voice of Midwestern small towns.

Following her acceptance speech on Thursday, Clinton, along with Kaine, will immediately embark on a post-convention bus tour of swing states, with stops scheduled for Pennsylvania, followed by Youngstown and Columbus.

PHILADELPHIA (AP) — Massachusetts Sen. Elizabeth Warren made an impassioned case for Hillary Clinton on Monday, hailing her as a... read more