Meyer using 2014 season as motivation for this year 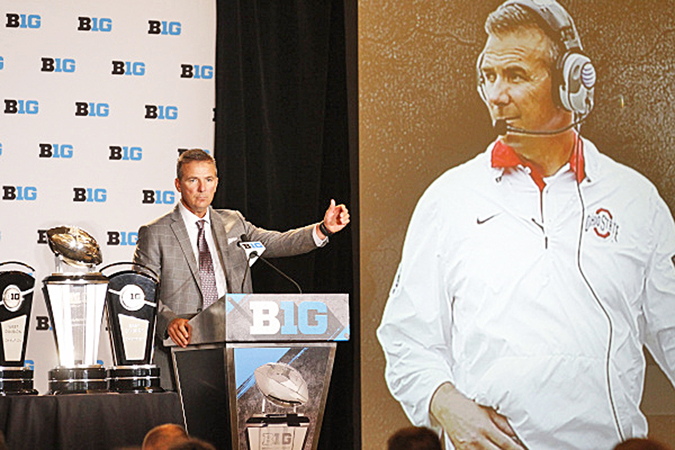 CHICAGO – Last year Ohio State football coach Urban Meyer warned his team against reliving and reflecting too much on the 2014 national championship season.

This year he’s all in favor of using 2014 as a model of what can be accomplished by a young team.

The Buckeyes will go into this season without 16 of last year’s starters, 12 of whom were selected in the NFL draft.

While Meyer says he has never lost so many players to the NFL at one time, he sees similarities to 2014.

“I see that potential. I think 2014 is the template that everybody wants,” he said on Tuesday on the second day of the Big Ten Football Media Days.

“I would say going into it this is as talented a group as we’ve had. Now how do we get them game ready?” Meyer said.

“We have to find a way to replace arguably one of the best groups of players ever to come through college football. They won 50 games, they won a national title, had the highest graduation rate in the history of Ohio State University and a record NFL draft,” he said.

“I don’t feel the overwhelming expectations that were here last year. It’s a free for all for playing time,” Meyer said.

Other thoughts from Meyer:

• GONE FOREVER: Senior running back Bri’onte Dunn, who was dismissed from the team earlier this month, has “no chance” of returning to the team.

“There’s no chance Bri’onte will come back,” Meyer said.

Dunn’s exit creates a concern about depth at tailback.

“You want four bodies at the tailback position. I count Dontre Wilson and Curtis Samuel in the mix. And we have DeMario McCall, Antonio Williams and obviously Mike Weber,” Meyer said.

McCall and Williams are true freshmen.

• WEBER THE STARTER: Redshirt freshman Mike Weber probably would have been the starter even if Dunn were still on the team, but Meyer said it is all but certain now.

“I anticipate Mike Weber will be the starting tailback,” he said. “I think he was in the mindset he was going to get that job during spring and in the summer.”

• THE OTHER MICHAEL JORDAN: Freshman offensive lineman Michael Jordan looks like he could be a starter in the fall.

The 6-7, 316-pound Jordan, from Plymouth, Mich., enrolled in January and played quite a bit with the first-team offense during spring practice.

“Michael Jordan will probably be in the starting lineup. I didn’t say he was a starter yet. The first week of training camp could decide if he starts.”

Franklin later said he did not accuse either Ohio State or Michigan State of negative recruiting.

Meyer said, “Absolutely not. That’s the first I’ve heard of that. That’s a pretty strong allegation. I will address that with Coach Franklin.”

Dantonio said, “That’s not our M.O. and that’s not how we do business.”

Tuesday afternoon, Meyer said he talked with Franklin and read the story.

“I’d like to meet the person who created that story. There’s no story. James actually came up to me and said, ‘I did not accuse Ohio State of negative recruiting.’ So I’m good. I looked at him and said, ‘You mean a media guy actually created a story. That’s the first time I ever heard of that,’ ” he said.