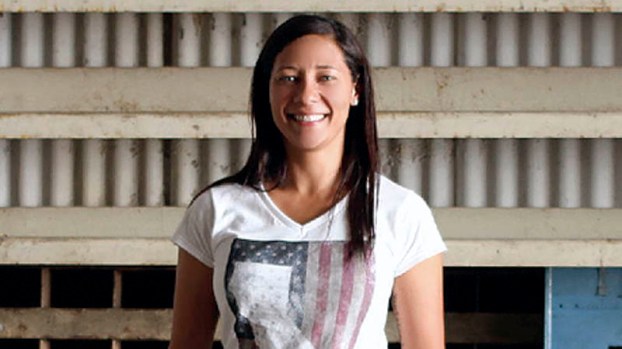 PHILADELPHIA — Wednesday at the Democratic National Convention brought speeches from several big names, such as President Barack Obama, Vice President Joe Biden and vice presidential nominee Tim Kaine, and earlier in the night, they were preceded at the podium by an Ironton native.

Kristen Kavanaugh, 36, already has an impressive legacy in her hometown. The daughter of Lloyd and Rosemarie Kavanaugh, she graduated from Ironton High School with honors and a 4.041 GPA in 1998. She was a standout on the school’s basketball and track teams, and her achievements wearing the orange and black earned her All Ohio honors in her junior and senior years and an induction to the school’s Athletic Hall of Fame earlier this year.

Upon graduation, Kavanaugh received an appointment to the United States Naval Academy, where she continued to play basketball and, in her senior year, served as team captain, and was awarded the honor of U.S. Marine Corps Female Athletic of the Year.

She was deployed to Iraq at age 24 as a lieutenant in a noncombat position.

Kavanaugh recalled the experience in her speech to the convention.

“We regularly received indirect fire,” she said. “After an attack, everything would fall silent. Seconds later, I would hear the sounds of the Army artillery battery returning fire, and the quick reaction force helicopters taking off in the enemy’s direction.”

Kavanaugh spoke of the units, special operations teams and Marine infantry battalions stationed with her, and she said she “trusted them with my life.”

She said she trusted her commanders to have the right strategy and follow the rules of engagement, and noted that trust should start with the nation’s commander in chief, a position for which she is backing her party’s nominee, former U.S. Secretary of State Hillary Clinton.

“She understands the importance of a strong military and diplomacy,” Kavanaugh said. “She knows we’re stronger when we work with our allies to keep us safe, and she has a specific plan to defeat and destroy ISIS. She has the experience, temperament, and steady hand to lead.”

She also took aim at the Republican nominee, real estate tycoon and reality TV star Donald Trump, who she said was engaged in “recklessness.”

She then listed a number of Trump‘s positions which she finds dangerous.

“He suggests abandoning our closest allies,” she said. “He praises dictators who’ve killed Americans. He says we should allow more countries to get nuclear weapons.”

She said Trump’s approach to foreign policy would mean more deployments and would endanger those who serve.

Kavanaugh said the election was about the judgment of the voters in November.

“Our troops, our nation, our world can’t afford for us to get this wrong,” she said of the need to support Clinton.

Following her time in the Marines, Kavanaugh attended University of Southern California, where she earned a master’s degree in social work.

She co-founded the Military Acceptance Project, a nonprofit which promotes inclusiveness in the armed services, regardless of gender, sexual orientation, race, ethnicity, faith and trauma survivor status. The group was recognized with a Champion of Change award from the White House in 2012.

Having had to keep her sexual orientation in the closet under the now-rescinded policy of Don’t Ask, Don’t Tell,” the cause is one motivated by her life experience. Her Ted Talk, “On Acceptance,” was part of global conference series’ 2013 main event.

Now living in San Diego with her wife, Kavanaugh works as a speaker, organizer and blogger and her work has been featured on the Truman Doctrine and OutServe Magazine.

She spoke with the Tribune following the speech to delegates at the Wells Fargo Center.

“It was surreal walking onto that stage, in front of all those people,” she said. “We had practiced the speech in a different room. I looked into the rafters and saw people everywhere. I just took it all in. It was really surreal.”

Kavanaugh said she was recommended as a speaker by the Truman National Security Project, a progressive, Washington, D.C.-based organization which promotes leadership on national security and foreign policy issues.

“They nominated me for the Clinton campaign,” she said. “They said, ‘Hey, Kristen might be a good speaker on national security’ and why I think Hillary is the obvious choice.”

She said she received the invitation just last Thursday. On Friday, she was contacted by a speechwriter for President Obama, who spoke with her for an interview and they began crafting her message, working through a follow-up call on Sunday night.

“She was phenomenal,” Kavanaugh said. “She did a great job. She listened and took some of my words and making them sound great.”

While the prospect of speaking to a national audience may be daunting for some, Kavanaugh said it was not a challenge.

“It’s easy to speak with conviction if you believe what you’re saying,” she said.

Kavanaugh said she is interested in a career in politics herself, as she continues to work and speak on issues believes in.

“Ideally, I’d like to be a Congresswoman,” she said. “But I realize there are a lot of things you have to do first.”

Lloyd Kavanaugh, a former National Guardsman, and Rosemarie Kavanaugh, who still reside in Ironton, watched their daughter’s speech on television.

“It goes without saying that we’re touched and proud,” Rosemarie said.

She said the couple were planning a trip to San Diego when their daughter found out about the opportunity and asked her parents if she could have two more days until the trip.

“I said, ‘Absolutely! It’s the chance of a lifetime’” Rosemarie said. “But she wanted to check with Mom and Dad first.”

Rosemarie said, while watching her daughter, her thoughts went to another family member, Kristen’s late grandfather Joe. She said that while he was battling leukemia, he wanted to stay alive long enough to see his granddaughter graduate from the Naval Academy, a wish he saw fulfilled.

“I’ll always remember the look on his face when he got to pin her ribbons on,” she said. “I know he was looking down tonight and had a smile on his face.”

Kavanaugh was not the only speaker from Ohio with military ties who spoke on Wednesday. Later in the night, Sharon Belkofer, a Gold Star Mother from Wood County, whose son was killed by a suicide bomber in Afghanistan, introduced the president before his keynote address.

The convention concludes tonight, as Clinton is set to formally accept the nomination of her party and speak in prime time.

A Chesapeake woman will spend the next decade in prison after admitting her part in the alleged sexual abuse of... read more