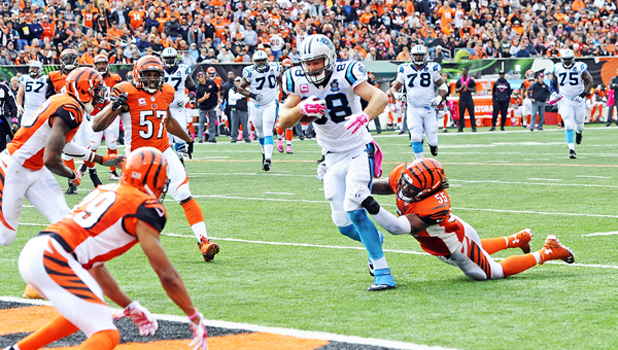 CINCINNATI (AP) — Linebacker Vontaze Burfict is suspended for the first three games of the season, which is bad enough for the Bengals. They’re trying to make him understand he needs to change his hitting style to avoid more suspensions.

Burfict was suspended by the NFL for games against the Jets, Steelers and Broncos for his history of illegal hits. The final straw was hitting Pittsburgh receiver Antonio Brown in the head during the playoffs.

Brown wound up with a concussion, and Burfict’s penalty helped move the Steelers in range for the winning field goal and an 18-16 victory. Throughout his four-year career, Burfict has repeatedly been fined for his improper play.

He’s able to practice with the team during training camp, which opened Thursday with players reporting. Burfict wasn’t available during the open locker room.

Defensive coordinator Paul Guenther has tried to impress upon Burfict that any further problems on the field will bring more discipline from the league, which has made it a priority to protect defenseless players.

“Obviously the league is making a statement, and he’s got to understand they are doing that and he’s going to have a red flag,” Guenther said. “He understands that. He’s a smart kid, and we’ll move forward with it together.”

They’ve tried to get the point across to Burfict in the past, without much success. In addition to penalties and fines, he’s suffered concussions because of his head-first style of play.

His blow to Brown’s head after an incomplete pass was the type of play that made teams reluctant to draft him out of Arizona State in 2012. The Bengals signed him as a free agent, and he quickly developed into their best linebacker.

Concussions, a strained neck and a knee injury that required surgery limited him to five games during the 2014 season. He was still recovering from the knee surgery at the start of last season and missed the first six games, all of which the Bengals won.

Cincinnati signed former Browns linebacker Karlos Dansby in the offseason, bringing in another player who can fill in while Burfict is suspended. Vincent Rey got more playing time last season while Burfict was out. Guenther said he might use different players in Burfict’s spot, depending upon the game situation.

The Bengals were in position to close out their first playoff victory in 25 years after Burfict’s interception in the closing minutes. Running back Jeremy Hill fumbled, giving the Steelers their final chance. Burfict’s hit on Brown gave them 15 yards, and cornerback Adam “Pacman” Jones drew a personal foul penalty for bumping an official during a verbal altercation with Steelers on the field, setting up the winning kick.

Guenther has told his players not to be goaded into losing their cool.

“You have to understand guys are targeting you,” Guenther said. “They are targeting some players. They are going to try to get underneath your skin and try to do those things.”

Owner Mike Brown disagreed with Burfict’s suspension and remains solidly in support of the volatile linebacker.

“Burfict is one hell of a football player,” Brown said. “He makes a difference for our team. We want him on the field. I regret for three games this year we won’t have him, but he’ll be back then. We expect outstanding play from him. He’s a difference-maker. We’re lucky to have him.”

Jim Walker jim.walker@irontontribune.com   DOVER — It was quite a ride. Unfortunately, there was a slight speed bump on Thursday.... read more