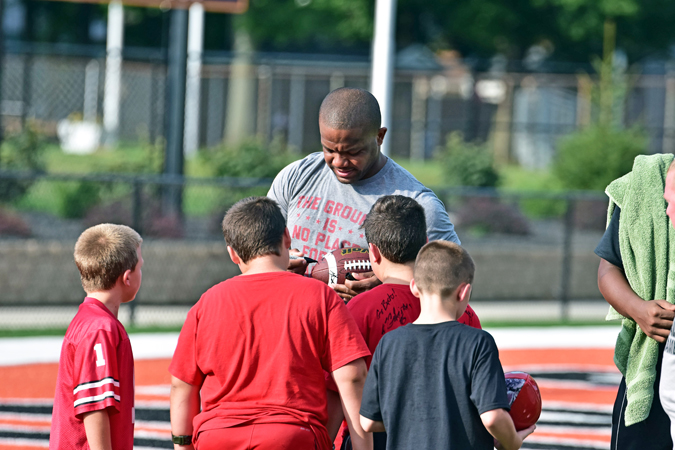 There was plenty of scarlet and gray on the field — both in clothing apparel and as former players.

The event was the brainchild of Tony Murphy and T.J. Keith — members of the Young Brilliantaires group — and in cooperation with the Richard’s Wish Foundation of Columbus.

Ironton’s Jermon Jackson, Tyler Whaley and Marcus Williams and Rock Hill’s K.C. Christian — all four played for the Buckeyes — spoke along with former Ironton standout Jason Harmon who was a four-year starter for Michigan State and also played Arena Football.

The message of all the speakers was loud and clear: stay in school, work hard on your academics, work hard as an athlete and follow your dreams.

But there was plenty of fun on the agenda. Players signed autographs, posed for photographs and split into two teams for a 7-on-7 flag football game.

Team Clarett came away with the win in the high-scoring affair with former Ironton football, basketball and track standout Marc Carter named the game’s Most Valuable Player.

The honorary celebrity coaches were Jermon Jackson and Jason Smith.