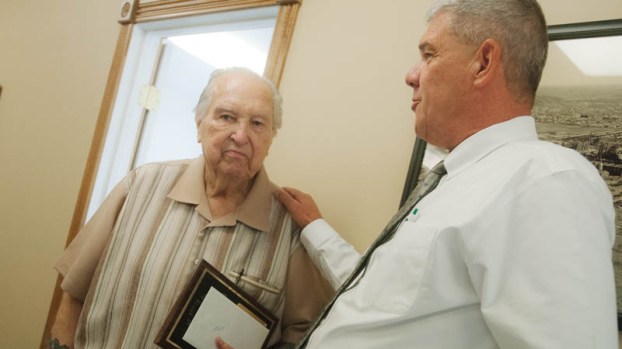 Caines, who has served in the position for 48 years, marked his last day of service on Friday and a dinner took place in his honor at village hall.

“The fact that he’s still here after all these years ought to tell you something about the job he does,” Mayor Jeff Gaskin said.

He said that Caines was first elected in 1968, and, over time, state law changed, and the position moved to appointment, rather than election.

“He’s been through six mayors, 30 years of which were under Bill Gaskin, my dad,” Gaskin said. “We’re lucky we got to keep him.”

He said that the position will not be filled and that the treasurer’s duties will assumed by Scott Thomas, the village’s fiscal officer.

Thomas, who has worked alongside Caines for 28 years, spoke of his work ethic.

“Bill has been on time every day,” he said. “You can always count on Bill. He’s a good man.”

“I was ready to go,” he said of combat duty. “But they didn’t send me.

He said the thing he would miss the most about the job is the people.

“Just the ones I come into contact with every day,” he said. “The workers and village employess.”

He worked 30 years as an operator for Allied Chemical in South Point, until the plant was shut down, and, in recent years, has worked three days a week at Pawn Shop Express in Ashland, owned by his son Tim.

“He’s reliable, consistent,” Tim Caines said of his father. “He even came in on weekends, he’s so dedicated to this job.”

Caines and his wife of 61 years, Joann, are moving to Nashville, his daughter, Patti Caines-Tyda said.

“The only time he hasn’t been here in 48 years is when he had a quadruple bypass,” she said.

Following the dinner, Gaskin presented Caines with a plaque “in gratitude of you 48 years of service as village treasurer.”

“We’re sorry to see him go,” Gaskin said. “I hope you don’t stay away and come and see us once in a while.”

Caines expressed his appreciation as he accepted the plaque, as well as a card and gift from the group.

“Thank you all for coming,” he said. “And like I always said, the village of South Point is number one. I’ve said that for 48 years. Thank you so much, folks.”