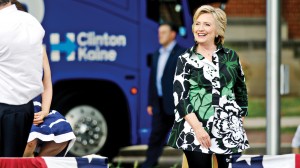 Kaine said the pair, who had made stops in Pennsylvania, followed by Youngstown in Ohio, had been tired from their time on the road, on top of a busy convention.

But the U.S. senator and former governor from Virginia said seeing the crowd’s enthusiasm upon their arrival at the rally, held at Fort Hayes Metropolitan Education Center, had renewed them.

“After an intense week, you gave us the burst of energy we needed,” he said. “This is pretty cool.”

The lawn of the school was packed with hundreds of supporters, who waited in the heat for a chance to see the Democratic ticket in person.

Campaign staff worked to distribute bottled water to the sweating crowd, while Cincinnati band My Sister Sarah performed to get their energy going.

Prior to Clinton and Kaine’s arrival, Columbus Mayor Andrew Ginther made a pitch for the Democratic candidates.

“I need a partner in the White House who can deliver,” he said. “Friends, I’m with her, because she’s with us and Columbus needs a champion.”

U.S. Rep. Joyce Beatty, D-Ohio, outlined the crucial mission for the ticket to win the state.

“As we know, as Ohio goes, so goes the nation,” she said.

Beatty said Clinton is the most qualified candidate for the presidency, and painted a contrast to the Republican nominee, real estate tycoon and reality TV star Donald Trump.

“She is the most skilled,” Beatty said. “She has the temperament for the White House. She won’t talk about how women look and she won’t judge you based on where you are from.”

Following Beatty’s remark’s, the campaign bus rolled up in front of the crowd and the former U.S. secretary of state, along with her running mate and his wife, Anne Holton, emerged to cheers from the crowd.

Kaine took the podium first, and expressed his feelings about being selected as Clinton’s running mate.

“I’m proud to be on this ticket,” he said. “And so humbled to work with someone President Barack Obama said is the most qualified person to run for president in a long time.”

Kaine said he was honored, not just to run with a qualified candidate, but also the first woman to be nominated by a major American political party.

Kaine said the nation needed a “You’re hired” plan, rather than the “You’re fired” plan he said Trump offered.

“The American economy was in freefall at the end of the Bush administration,” he said. “President Obama pulled us out of it.”

He said there was still work to be done and said the ticket would push for an “economy for all” by focusing on skills training, debt free college, a minimum wage above the poverty level and equal pay for women.

“These are the basics of the ‘You’re hired’ plan,” Kaine said.

He said Trump has not offered specifics on how he intends to address the nation’s problems.

“If you ask him how he’s going to do it, he just says ‘believe me,’” Kaine said. “A lot of people believed Donald Trump and got stiffed and burnt.”

He spoke of the Trump University case, in which the Republican nominee is being sued for fraud, as well as a dispute in which he said Trump did not build condos to retirees after they had given him money.

“We are too great of a nation to believe a guy who’s ripped off nearly everyone he’s come into contact with,” Kaine said.

Clinton took the stage next, and praised former governor and Democratic U.S. Senate nominee Ted Strickland, who was in the crowd.

“I think your other senator, Sherrod Brown, needs a partner in Washington,” she said. “Do everything you can to send Ted Strickland to the Senate in November.”

Clinton said she has specific plans to revitalize the economy.

“We’re going to make the biggest investment in jobs since World War II and put Americans back to work,” she said.

She called for major investments in the nation’s infrastructure.

“Roads, bridges, water systems,” she said. “We need a new electrical grid to distribute all the clean, renewable energy we’re going to be generating.”

She also called for the country to finish the job bringing high speed broadband to all Americans. She said a study found that 70 percent of the nation’s teachers were assigning homework that required children to go on the Internet.

“Five million kids don’t have access at home to high speed Internet, so already they’re getting left behind,” Clinton said.

She called for a hike in the minimum wage, to a more sustainable level.

“Nobody who works full time will be in poverty,” Clinton said.

“I want to see greater access to credit and eliminate red tape,” she said. “And I’m personally sickened when I hear stories of Donald Trump refusing to pay people like plumbers and electricians.”

She then went on the offensive against Trump, who she said she believes “is a threat to our democracy.”

Clinton said that although Trump has said he wants to “put America first,” his products, such as his clothing line, are manufactured in overseas factories, rather than the U.S.

“We’re dealing with a person who has a history of stiffing people and making things anywhere besides America,” she said.

Clinton said it was important to vote for someone who had a clear outline of how to tackle the issues facing the nation.

“We Americans do better when we set goals, roll up our sleeves and get to work together, because we are stronger together,” she said, citing her campaign’s slogan, which was featured prominently on her bus.

In closing, she asked the voters to hold her accountable.

“I want you to not just vote for me, in November, but to help me be the best president for all Americans,” she said.

The Columbus and Youngstown visits will likely be followed by many more in the state, which is seen as a major battleground in the presidential race. The most recent polls of Buckeye State voters have showed the race in a dead heat.

Trump is set to arrive in Columbus today, with a town hall meeting planned for the Greater Columbus Convention Center.Clinton-Kaine bring post-convention tour