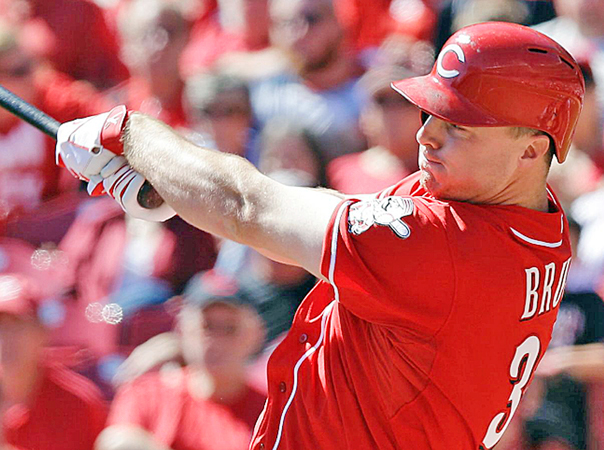 Cincinnati Reds’ All-Star rightfielder Jay Bruce was traded to the New York Mets on Monday as part of the team’s continuing rebuilding phase. Bruce is batting .265 with 25 home runs and a National League-leading 80 runs batted in. (Photo Courtesy of The Cincinnati Reds.com/Aaron Doster — Associated Press)

CINCINNATI — No matter what Jay Bruce had done for the Cincinnati Reds during his professional baseball career both on and off the field, it wasn’t worth $13 million.

“This is a very difficult trade for us to make because of how our fans, ownership and everyone in our organization feel about Jay,” said Jocketty.

“But we acquired two quality players who better fit the direction our organization is heading. Herrera is considered one of the brightest young stars in the game today. Wotell fits in with the other good, strong arms we’ve been trying to stockpile in our minor league system.”

Having Bruce under contract for next year proved to be attractive to the Mets.

“We would not have done the deal without the extra year of control,” said Mets’ general manager Sandy Alderson. “We were not looking for a rental player, certainly not looking to give up the kind of talent we did for the next two months.”

Bruce is due to arrive in New York on Tuesday and will be inserted into the batting lineup behind Yoenis Cespedes who was acquired at the trading deadline last year.

Bruce — a two-time All-Star including this season — is on pace for his best season ever. He is batting .265 with 25 home runs and a National League-leading 80 runs batted in. The Mets look for him to provide some protection for Cespedes.

The other five — Johnny Bench, Tony Perez, Frank Robinson, Ted Kluszewski and George Foster — are all in the Reds’ Hall of Fame.

“Over the past nine seasons we couldn’t have asked for a better person to represent our team, our city and Major League Baseball, both on and off the field,” Jocketty said of Bruce.

“During these difficult last few months he has answered questions about his future almost daily while continuing to handle himself with the class and professionalism he has shown since the day we drafted him. We wish Jay and (wife) Hannah nothing but good things in their future together.”

Herrera was currently with the Mets Triple-A Las Vegas farm team. He was batting .276 with 13 home runs and 55 RBIs.

The 22-year-old infielder did make a couple of short-lived major league appearances with the Mets in 2014 and 2015 that totaled 49 games, all playing second base.

Herrera was originally drafted by Pittsburgh but traded to the Mets on Aug. 13, 2013, with right-handed pitcher Vic Black in exchange for catcher John Buck and outfielder Marlon Byrd.

BEREA (AP) — Racing downfield after cruising past the cornerback, Terrelle Pryor dove forward and grasped the ball with his... read more