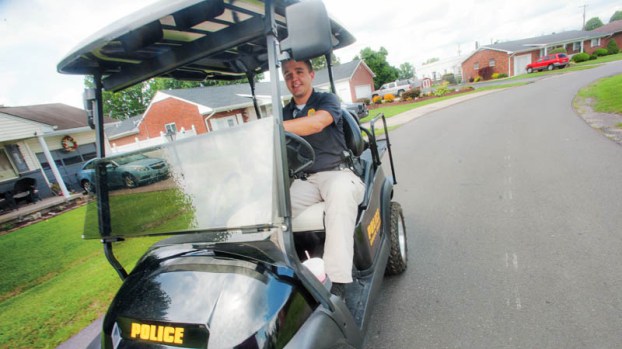 Cops make use of golf cart

SOUTH POINT — Residents of the village of South Point may have noticed a change in their police force’s mode of transportation these past few weeks.

The village recently purchased a golf cart for use in street patrols, and Mayor Jeff Gaskin said it is the latest in an effort to get deeper into community policing.

“There’s a lot more involved than just being more available,” he said. “Especially with tinted windows and air conditioning, we roll up the windows and the police are not accessible. With a golf cart, you don’t have that.”

Gaskin said the approach is to get the officers closer to the people.

“Of course, a golf cart is not going to be used for high speed chases or drug raids,” he said, noting that the vehicle is not equipped with emergency lights or will be used as a primary vehicle in incidents.

Police chief Chris Mahjer said the vehicle has made officers more approachable to the public.

“I think our main thing is to be proactive to the idea of community policing,” he said. He said that, often, police patrolling by cruiser will subconsciously be averse to driving into a dead end street or area where they would have to turn around. He said the use of the cart changes that.

“It makes you want to go and hit every alley,” he said.

Mahjer said the idea of the cart was something they had planned for some time and, when Gaskin took office in January, they wanted to concentrate on ways to make police force closer to the people.

Gaskin said the cart was purchased from and designed by Bruce Roach, of Bruce’s Custom carts in Ironton.

He said the village opted to go for an electric cart, rather than gas, primarily to reduce noise, something that came in handy when officers recently used the cart to respond to a home alarm.

“It turned out to be a false alarm,” Gaskin said. “But they were able to sneak right up on the home.”

Mahjer said the cart is registered in accordance with an ordinance, recently passed by the village register the vehicles.

“We want to stay within the regulations and guidelines of what we expect from others,” he said. “That way, people can see it and know what is expected to make them legal.”

Gaskin said the response to the cart has been “overwhelmingly positive,” while Mahjer said it has promoted greater interaction between officers and residents.

“Kids are loving it, and it’s an opportunity to push safety,” he said. “And you get to actually talk to that guy who’s mowing his lawn or working on his car and ask them how they’re doing. It’s a conversation starter.”

PIKETON (AP) — Investigators are operating under the theory that there were multiple attackers in the slayings of eight people... read more