Learning basics while on the job 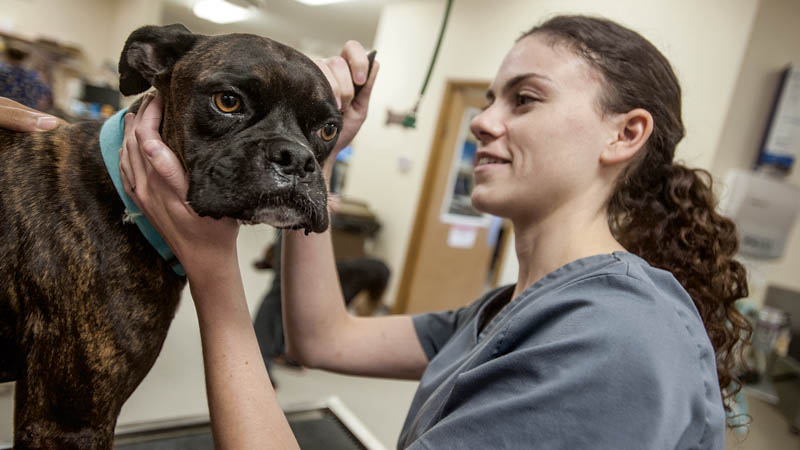 Randi Johnson performs an examination on one of the patients at the Proctorville Animal Clinic. Johnson is one of two interns at the clinic.

PROCTORVILLE — Two veterinary students from The Ohio State University received valuable work experience from a Proctorville clinic as part of their education.

“We’ve been learning about internal medicine, and we’ve both done our first neuter and spay while here,” Forte said.

The students have helped with some of the surgeries performed in the clinic.

“All of those are finished by morning. Johnson said.

The rest of the day is spent on regular visits with patients.

Johnson and Forte, in their second year at OSU’s College of Veterinary Medicine, were selected as part of a program by the Stanton Foundation to get experience at the Proctorville clinic.

Dyer said good vets were needed to come to the area and used his relationships from serving on the board to get the positions created.

“It’s really a great fit for students,” he said, noting the rural area was of particular appeal to the foundation. “They liked that we’re a higher quality service in an underserved area.”

Dyer said the area gives them a chance to learn from incidents, such as animal that has been the victim of a snakebite, that they otherwise wouldn’t.

“You see things in a rural area that you don’t at a university,” he said.

Another pair of students worked at the clinic before Johnson and Forte’s stay, which ended Friday. In total 16 students from OSU were selected to work at four clinics in the state.

Forte spoke of their preparation for the visit.

“We did four weeks of intense training at OSU before coming,” he said.

The two have three more years to go on their education and hope to go into general practice, specializing in small animals.

Johnson said she has wanted to work in the veterinary field since she was young and said her time at the clinic was helpful.

“It’s been a positive experience,” she said.

Forte said he had always been interested in science, and did not settle on the field until college.