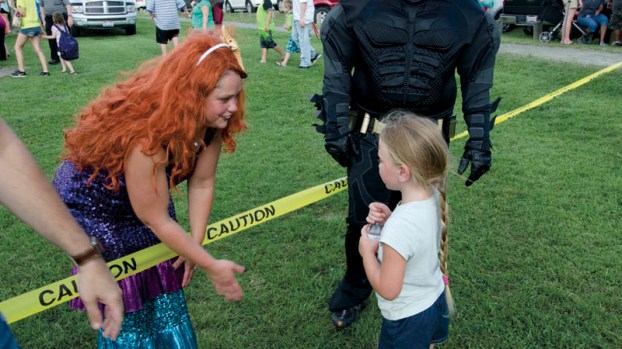 A volunteer, dressed as Ariel from “The Little Mermaid,” greets children at a backpack giveaway hosted by South Point Community Churches on Tuesday.

SOUTH POINT — Hundreds of children and their families came out on a sweltering Tuesday evening to pick up supplies for the coming start of school.

The event was heavily attended, with the parking lot and adjacent street filling up with cars as families arrived.

The group, comprised of six churches, hosted the event together for the second year, Terry Wagner, the pastor of Tri-State Worship Center, said.

“We started last year,” he said. “Everybody was doing their own thing and we thought, ‘What’s the point of that?’ Here’s an opportunity for us to come together as a community and as the body of Christ.”

He said there is always a need for school supplies at the start of the academic year.

Altogether, the group had 700 backpacks, purchased by the association and filled by the individual churches, available to hand out, he said, adding that the backpacks were purchased with funds from the association’s annual Thanksgiving service.

In addition to the backpacks, free food was offered at the picnic shelter and free haircuts were offered at the gazebo, while the playground was available to the children.

“Being at the park is convenient,” Wagner said. “They can also enjoy the slide and the swings.”

Visit from a legend

Senior center hosts portrayal of Eleanor Roosevelt Members of the Ironton Senior Center took a trip back in time to... read more