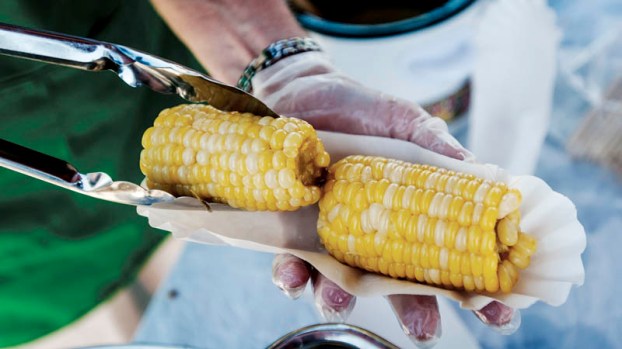 Terry Belcher and Mike Pearson were dishing out corn from hot pans of water for Ironton In Bloom’s August food festival.

Each second Saturday in the month, the organization showcases produce as a way to draw shoppers to the Ironton Farmers Market.

This Saturday, however, the heat and humidity was cutting down on the number who normally turn out.

“We aren’t seeing the crowds we would like to,” Belcher said as she poured butter on some ears.

The weather has been affecting the vendors at the farmers market as high temperatures are impacting shoppers.

“It’s been slow for a while due to the heat,” Tammy Hanshaw, a vendor, said. “And with school starting. But it should pick up soon.”

Next month the festival will feature tomatoes and bologna sandwiches, followed by apples for the month of October.

Later this month on Saturday, Aug. 27, Ironton aLive will host a Farm to Table banquet at the newly renovated Oak Ridge House at 111 S. Eighth St. The dinner will feature fresh produce from farmers market vendors.

The literature said it all: Keeping Symmes Creek clean since 1977. That’s what a group of volunteers have done for... read more