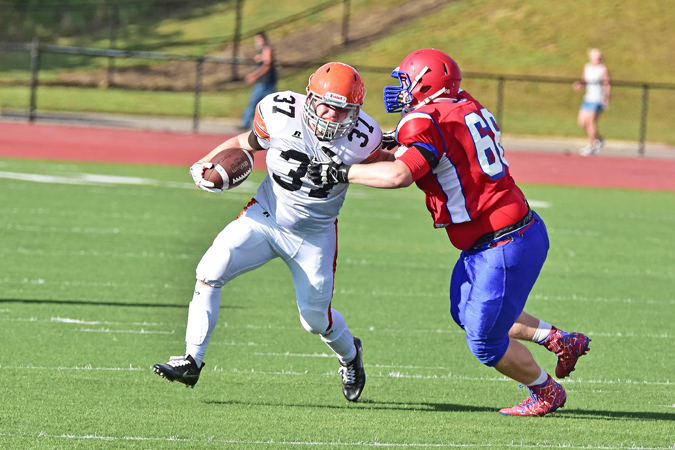 Don’t let their looks deceive you.

While this year’s version of the Wheelersburg Pirates aren’t as big overall as past teams, Ironton coach Mark Vass said the talent is still there.

“They are a lot like us in the fact they have a lot of new faces, but they are a sleeker, trimmer version of last year. Regardless, they are still a good team,” said Vass.

“They are not as big up front but they are very aggressive, work well as a unit and execute well.”

The Fighting Tigers will visit Wheelersburg on Friday for the traditional season opener between the two teams.

The Pirates went 13-1 last season losing only 36-6 in the state semifinals to eventual state champion Coldwater.

“It’s a tough opener, but it’s a great challenge for our players. We have a lot of new faces and young guys, so we need to see if they’re ready to step up,” said Vass.

The Pirates have used both junior Mack Dyer (6-2, 185) and junior Cole Lowery (6-1, 175) at quarterback. Lowery started at Portsmouth last season.

“They have two good quarterbacks. Both can ran the option and both can throw the ball,” said Vass. “Newsome and Reyes are both good running backs. Newsome has good size and runs hard and Reyes is very quick and skilled.”

“They have an excellent group of receivers,” said Vass.

Up front the Pirates have a senior lineup with the exception of junior left tackle C.J. Hall (6-0, 225).

The defense is led by the linebackers, namely junior Xander Carmichael (6-2, 200) and Hatfield.

Junior Jeremy Cooper (5-9, 200) is quick and aggressive and anchors the line at tackle. Hall is the other tackle with Darnell the left end and junior Alex George (6-1, 195) the other end.

Senior Taylor Doerr (5-11, 160) and Lowery are the outside linebackers with Reyes and Newsome the corners and Bivens the free safety.

“They aren’t big on defense, but they are quick and aggressive and they fly to the ball,” said Vass.

Ironton-Wheelersburg tickets now on sale Tickets for the Ironton at Wheelersburg football game will be on sale in the... read more