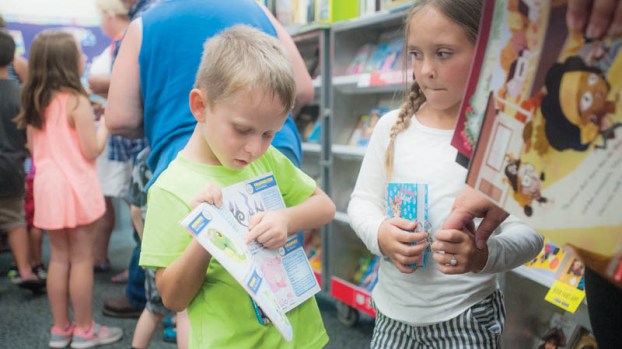 “This is what a butterfly looks like” says Easton Collier, 5, as he shows the book to his older cousin Hollie Moore, 6, during the book fair at Chesapeake Elementary School Tuesday evening.

Back to school gathering

CHESAPEAKE — With a week of the school year under their belts, Chesapeake Elementary invited students and parents out Wednesday for a community event.

The annual Family Book Fair Night took place at the school, in conjunction with the Scholastic Book Fair, which runs through today.

In addition to the fair, where students could purchase books, school supplies, stationary, stickers and more, the cafeteria was set aside, for families to play games such as Zingo and Connect Four, work on coloring books, enjoy face painting or sit in for a read-aloud session from teachers and PTO volunteers.

“We do this to kick off the school year with the book fair,” assistant principal Troy Tucker said. “It brings families in and gets the community involved.”

Tucker, who has been with the school for three years, said this was the second year for the fair.

Amanda Davis, a third grade teacher at the school, was running the register at the book fair, along with Stephanie Ward, the president of the PTO.

Davis said several of the items had been especially popular.

“Anything with Pete the Cat,” she said. “Any shark books, which come with shark teeth — those are gone completely. There was a book on spies, which went quickly.”

Ward said proceeds for the fair will go toward paying for teachers to attend conferences.

“Anytime we do a Scholastic fair, we get Scholastic dollars for that,” she said.

Students were looking over the racks of books, which spanned all age ranges, picking out selections that met their interest.

Third grader Nathan Case was there, along with his parents, Christine Case and the Rev. Charles Case of Chesapeake United Methodist Church. He was looking over a book about the Titanic.

“I’m getting these,” Ace Anderson, a second grader at the school, said, showing off his large pile of books.

“I like these kind of books,” he said, pointing to selections of Star Wars and DC Comics’ “Justice League.”

With the fair being a back-to-school event, principal Trisha Harris weighed in on the new school year.

“It’s been going great,” she said, adding that the school has another event coming up soon.

A grandparents ice cream social will take place at the school on Sept. 7. Kindergarten and first grade students will attend from 4-5 p.m., while the event will run from 5:30-6:30 p.m. for second through fourth graders.

Park updated through Eagle Scout project A new coat of paint on the gazebo and new mulch underneath the playground... read more