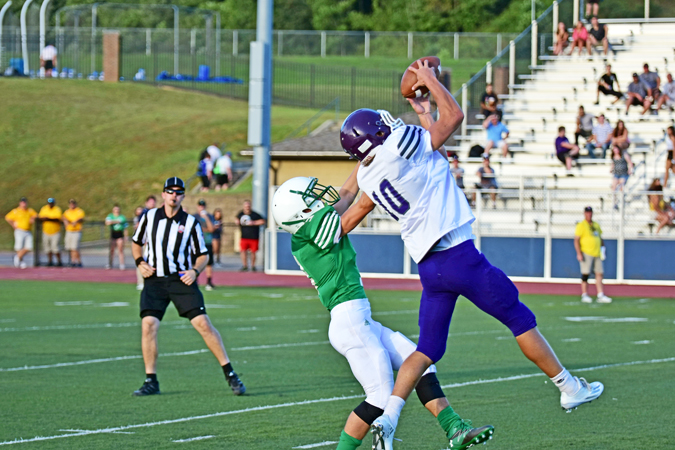 Chesapeake Panthers’ wide receiver Austin Browning (10) goes up in the air to make a catch during the Ohio Valley Conference previews. The Panthers open the regular season at Oak Hill on Friday. (Kent Sanborn of Southern Ohio Sports Photos)

Clark is facing a frightening situation heading into Friday’s season opener at Oak Hill. The Panthers are replacing almost all their offensive and defensive lines and playing on the road isn’t helping disguise the program.

“It’s the first game and we have a whole bunch of new starters on both sides of the line. That’s scary,” said Clark.

Chesapeake rolled in the season opener last season with a 56-6 win over the Oaks. But Brendan Meadows is the lone returning interior lineman which makes it understandable why Clark is getting chills down his spine.

“First of all, you don’t know how they’ll react in their first game and it’s on the road. Secondly, Oak Hill is tough to beat at home. They’re solid and don’t do things to beat themselves.”

Oak Hill is virtually the opposite of the Panthers. The Oaks return four of five interior offensive linemen but have a lot of new faces in the backfield.

“They’re pretty good up front. It’s going to be kind of an adjustment game. I don’t know what to expect.,” said Clark.

“Cole is a nice target. Mullett is pretty good and pretty aggressive on offense and defense,” said Clark.

Defensively Moore and Sites are also strong up front with Mullett and Moore the ends. Sophomore Bayley Clutters (5-7, 170) is the top linebacker.

“The front seven is pretty good on defense. The defensive line is aggressive and the inside linebackers are pretty solid,” said Clark.

“Our skilled players are good and experienced, but you have to play well up front or it doesn’t matter.”

Ironton-Wheelersburg tickets now on sale Tickets for the Ironton at Wheelersburg football game will be on sale in the... read more