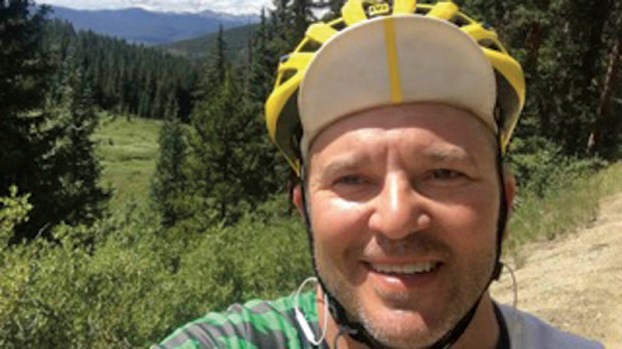 Tony Fuller, an Ironton native who now lives in Denver, Colorado, is biking across the country to raise awareness of issues of anxiety and depression. He is being accompanied by a three-person crew who will document his journey for film.

Journey to focus on fight against anxiety, depression

An Ironton native is making his way across the country to raise awareness for an issue he has personally battled.

Tony Fuller, who now resides in Denver, where he works as creative director of an advertising agency, has been biking across the United States over the past month to bring attention to those suffering from anxiety and depression.

“I have four weeks finished, with one week to go,” Fuller said, of the journey, which began in San Francisco, California, and follows the TransAmerica Bike Trial and will end in Yorktown, Virginia.

His route has taken him through Sacramento and Folsom in California, then through Nevada, Utah. From there, he went to Colorado, then through, Kansas.

“While I was riding through Kansas, there were a few days where it was completely straight,” he said. “I didn’t have to turn my handlebars, just ride.”

After a ride through Kentucky, he arrived in Ironton on Monday, where he was staying for the night at his parents’ home.

Working with a crew of three, Fuller, a 1986 graduate of St. Joseph High School, said his ride is being filmed for a documentary, and that a foundation is being started to aid those suffering from mental illness.

“We’re hoping to break the stigma,” he said of anxiety and depression. “People like me tend to keep to themselves. It’s not like you can say, ‘get over it.’”

Fuller’s journey across the nation is being documented at www.cycletherapy.com. He said that exercise is an important part of the healing process and helps individuals to manage these issues, as he has.

“It’s something I’ll always have, but I’ve been able to be engaged with daily life,” he said.

As part of the project, they have asked others to share their stories.

“People are really happy to talk about rides, but when you bring up anxiety and depression, they can get quiet,” he said. “Others share and open up. We’re hoping to create a community of people who can share their stories and experiences.”

He said communication and knowing he was not alone in his experience was vital to his ability to overcome.

“I think what it’s about is to get people to talk about it. I had these feeling growing up, and talking to people is the first step,” he said.

Fuller and his team have set up a site through GoFundme.com, in which people can donate to the ride and film. He said all funds left over at the end of the project will go into the foundation.

“The donations have been humbling,” he said. “And the amount of comments on a daily basis is inspiring.”

Ironton schools may have special board meeting

There will be an emergency meeting of the Ironton Board of Education at 5:15 p.m. on Wednesday at the Ironton... read more