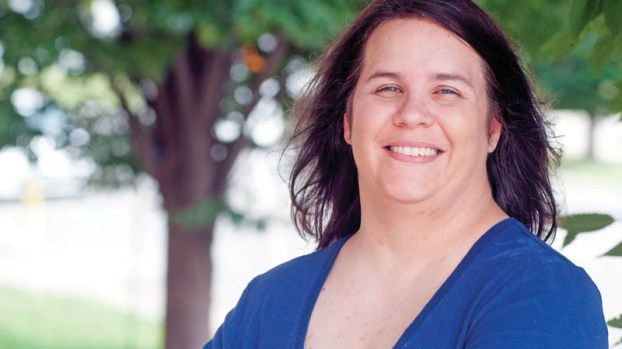 When Ginger Gillenwater was 5 years old, those observing her stellar twirling routine would never have guessed the secrets the young child was keeping.

When Ginger Gillenwater was 5 years old, those observing her stellar twirling routine would never have guessed the secrets the young child was keeping.

Now 36, Ginger wants children everywhere to hear those secrets and know someone is willing to listen to any child suffering the same traumatic experiences.

From 1985 through 1989, every summer for Ginger was an unspeakable nightmare. She was sexually assaulted by an extended family member on a family farm all five of those summers, from age 5 to age 9.

“I was aware what was happening was wrong,” she said. “But I worried about getting caught and getting into trouble. When you’re that age, you don’t know the words to describe what is happening to you.”

To cope, she lost herself in twirling.

“It helped me focus,” she recalled. “I really dug in and performed well.”

Ginger had confidence on the dance floor, but was anxious and reserved in social settings due to the loss of self-esteem stemming from the abuse.

Early into the abuse, she attempted to tell adult family members what was occurring but was never taken seriously. So, she clammed up for several years, absorbing the pain and confusion, until noticing something in a sixth grade sex education textbook at school in 1992.

“It was about sexual abuse,” Ginger remembered. “It put a name on what I had gone through.”

“I blamed myself a lot,” she noted, adding self-blame is typical of sexual abuse victims. So is self-injurious behavior. To re-route her emotional pain — and punish herself at the same time — Ginger began cutting herself. She made up excuses when adults asked about her wounds.

“I always told my mom the cat scratched me. I don’t think she ever realized what I was doing.”

Sadly, neither of Ginger’s parents, nor any other adult, thought to probe and ask why she continually bore new abrasions on her skin.

“By the time I was a teenager, I was angry. I felt like there was a wall in front of my face I couldn’t get past.”

She felt she couldn’t talk to anyone about the abuse, particularly because the abuser was a family member. To cope, she poured her heart into twirling, ultimately winning hundreds of awards, being named Ironton High School’s head majorette in 1997 and ‘98, and claiming the ‘98 Ohio State Three Baton Championship, the only person from Lawrence County to win the title other than Beth Rist in the early 1980s.

But the cutting continued until Ginger was 18 – ceasing only after confiding in a friend who, unlike anyone else to that point in her life, actually took the time to listen and show she cared.

“She begged me to stop, so I did,” Ginger said, adding her self-esteem was so poor she was more concerned with her friend’s worries than her own well-being.

A year later, she met and eventually married Joe Gillenwater, her husband of 16 years.

“I told him about the abuse early in our relationship because I didn’t want it to become an issue later,” she recalled. “Obviously, he stuck around.”

Joe not only stuck around, he supported Ginger through the ebb and flow of emotions caused by anxiety and depression. In 2011, she was diagnosed with complex post-traumatic stress disorder (CPTSD).

“I completely get that you can become emotionally immature because of sexual abuse,” she said. “I definitely was.”

She wrote about her experiences multiple times, planning to one day publish them in a book. But fears of repercussions from people who want her story to remain dormant always made her back off.

“The story has to be told. This is happening everywhere, in all economic classes, right now,” Ginger said of young children being sexually abused. “These kids don’t trust anyone anymore. They don’t think they’re going to be believed. I’ve been there.”

In 2006, Ginger joined Healing Through Creativity in Huntington, an arts group that organizes festivals for those who have survived various types of trauma, serving on the board of advisers from 2007-2009.

“I met many young adults and adolescents with stories of sexual abuse,” she recalled. “They were just like me when I was younger. They didn’t know what to do with their emotions.”

Ginger will be the guest speaker at the group’s next meeting in October in Bluefield, West Virginia, where she will share her story in front of a crowd — something her anxiety would not have permitted her to do just a few years ago.

“I’ve overcome much of what I lost,” she said, adding she started her own internet and marketing business in 2007 and began serving as chairman of Ironton aLive in 2014. “My resentments have diminished over time. I’ve forgiven, but not forgotten. If you don’t forgive, it will eventually eat you up.”

Today, her goal is to reach out to anyone suffering abuse and offer them her guidance. “When I was young, people didn’t talk about childhood sexual abuse,” She said. “I felt so alone.”

Her mission is to ensure other victims never feel alone.

Anyone wishing to contact Ginger directly to seek advice or simply talk about their experiences can do so at gingergillenwater@roadrunner.com.

Thuy Nguyen, who works as a primary care physician in family medicine at Bellefonte Primary Care in Ironton, has overcome... read more