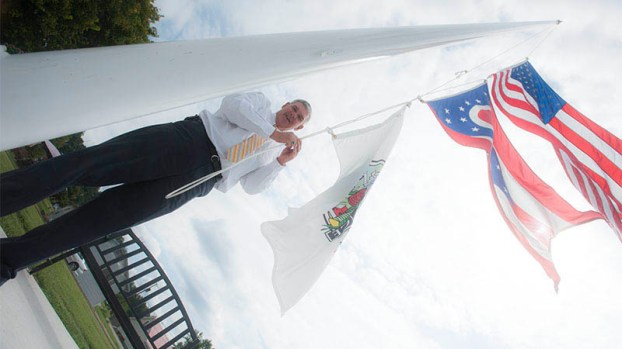 SOUTH POINT — People traveling past village hall in South Point over the past few weeks have been noticing a change to the grounds.

A flagpole and four new benches were installed in a newly-built plaza, along with planted flowers.

“I get compliments all the time,” Mayor Jeff Gaskin said. “It’s one o’clock, and we’ve had two today already.”

The project, which began about three months ago, was funded through donations from businesses and individuals in the village.

The flag was donated by JENNMAR McSweeney, a drill and steel products manufacturer in the village. The pole, which had previously stood at their facility, was brought to the village hall, where workers renovated and painted it.

Pickett Concrete donated the materials for the pad for the pole and benches, as well as the sidewalk, Gaskin said, while local apartment owner Dale Jacks made a financial contribution.

Gaskin said another donation came from a local businesswoman.

“She would rather not be named, but let’s just say, if I move again, I’ll know where to rent my truck,” he said, providing a hint.

The mayor said a few smaller donations from individuals rounded out the project, the labor for installing the pole was done by village workers and the only cost to the village was for the American flag.

“Our employees and village workers did a wonderful job,” he said. “They poured the concrete set the anchors and planted the flowers.”

The flagpole is the centerpiece of the plaza, which is handicapped accessible, and it hoists the United States flag, the Ohio state flag and one more that Gaskin is particularly proud of.

“We have the very first and only, so far, outdoor Lawrence County bicentennial flag,” he said.

The flag came from the Lawrence County Chamber of Commerce, who are helping to organize the county’s 200th anniversary celebrations. The chamber has an indoor flag for the event at its headquarters.

Gaskin said he would like to add more benches to the plaza.

“We’d like to do more ‘In memory of’ benches,” he said, and said that anyone who would be interested in donating can call his office.

He said he’s considering more ideas for the grounds and hopes to do more in the future.

“We’d like this to be a gathering space for the community,” he said.

More than $1M from feds to aid laid off miners

WASHINGTON, D.C. — Miners in Ohio who have been laid off will be seeing relief from the federal government, U.S.... read more