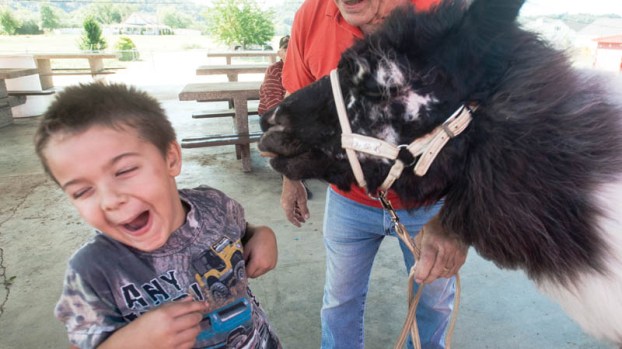 Lawrence County kicked off its bicentennial celebration on Saturday at the fairgrounds in Rome Township.

The celebration, organized by the bicentennial committee and the Lawrence County Chamber of Commerce, runs through today.

Early in the day, a mural, with a logo commemorating the county’s 200th anniversary was unveiled on one of the barns.

The events started off early with a 5-K run and walk around the grounds, sponsored by the Lawrence County 4-H.

Following that, attendees could drop by the auction building, where the Good New Llamas made a visit.

Owned by husband and wife Judy and Tom Ross of Lawrence County, the llamas were available for photos and petting. The couple produces a variety of products from the animals, such as blankets and clothing spun from their hair.

One of the biggest draws came at noon in the auction building, when the Columbus Zoo arrived and presented animals to the crowd.

Families got a chance to see a bearcat, an echidna, an American alligator and a clouded leopard up close, while the animals’ caretakers gave facts about the visitors.

The bearcat, native to Africa, is omnivorous and survives by eating small mammals, as well as fruits. The echidna, native to Australia looks like a cross between a hedgehog and a platypus and has a short beak for eating ants and termites. They spend their life underground and have one of the lowest body temperatures of any mammal on earth, the handlers told the crowd.

Following the zoo’s presentation, the Newport Aquarium was set arrive with a mobile shark tank, penguins and their “Scales and Tales” program.

Meanwhile, throughout the grounds, food vendors were set up, as well as inflatables for the children.

In the main barn, a number of vendors were selling merchandise and nonprofits were handing out information at booths.

Laura Murphy, of Ironton, was one of the vendors. She was selling creams and soaps made from goat’s milk from her business, Sheep-Farm Hill.

“We have dairy goats, not far from Ironton, about 7 miles,” she said. “We’ve been doing it for about 40 years.”

She said the goats come from one family they have been raising for multiple generations. She hopes to expand her offerings by the end of the year.

“We’re working on shampoo bars,” she said. “We still need to test them, and we hope to have them ready by December.”

Marshall Daniels was another vendor selling in the main barn. His booth featured handmade art, made in Mexico from recycled metal.

“I have an auction in Proctorville and I deal in antiques,” he said of the business he runs with his wife Kathy.

He said they attend many events a year and saw the metal art in Canton, seeing it as a unique opportunity to sell. The pieces ranged in size from small tabletop items to a large, life-size moose, which was set up in the midway.

Attendees also got a chance to learn about the new Tri-State STEM+M School, set to open to high school students in 2017.

Director Jayshree Shah and lead teacher Alicia Spears were distributing information from their booth, as well as offering science-themed activities for the children.

The booth featured LEGOs, a laser maze and an activity where participants had to stack nails on the head of one nail.

Wrapping up the day’s events was a motocross, held at the fair’s grandstand.

The bicentennial events continue today, with the Columbus Zoo giving another presentation at noon. The Newport Aquarium will make a return visit at 2:30 p.m., followed by the Good New Llamas at 4:30 p.m.

A senior spelling bee, organized by the Rome Guys and Gals 4-H Club, is set to take place at the shelter across the midway from the Payne building at 2 p.m. Immediately following the bee, local historian Jean Fuller Butler will give a presentation, portraying her ancestor, Lawrence County pioneer Mary Swain Fuller.

Admission to the bicentennial celebration is $1 and parking is $1.